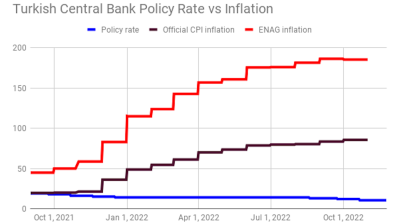 Official consumer price index (CPI) inflation in Turkey amounted to 86% y/y in October, following on from the 83% announced for September, the Turkish Statistical Institute (TUIK, or TurkStat) said on November 3 (chart).

The October figure is the highest headline inflation rate recorded by Turkey since the 91% posted in June 1998.

At 86%, Turkey stays in sixth place in the world inflation league. Turkey has led the global inflationary period. Now, it is leading the stagflation/slumpflation period. Critics of the Erdogan administration claim the official figures in no way properly reflect the ongoing tragedy besetting the country’s real economy.

When it comes to Turkey’s interest rate cuts introduced despite rampant inflation, there are observers who contend that the explanation of “Erdogan chooses growth” is a fallacy. However, the powerful global media machine repeats the idea millions of times over, it becomes a “truth” and it is not possible to dispel it, it is said. Turkey’s rate cuts actually have no logical economic explanation, so the argument goes. The driver behind the monetary easing is actually a subject of psychology, or political psychology if you like.

Turkey’s government, note, provides loans at rates dramatically lower than the policy rate to some selected (or targeted), lucky economic actors (when it wants “growth”). Additionally, lately the political authority has been trying to curb loan growth via macroprudential measures and non-capital controls, while cutting the policy rate at the same time.

The Istanbul-based ENAG inflation research group calculated October inflation at 185% y/y, down from 186% y/y in September.

TUIK, meanwhile, also gave the official figure of 158% y/y for producer price index (PPI) inflation in October, up from 152% in September. The October figure is a record.

The authority said it expected inflation to peak at below the 90%-level in November and to sharply fall in December due to the base effect thanks to the high inflation figure (14% m/m) reported for December 2021.

The guidance was based on the assumption that the Turkish lira (TRY) will not experience another crash. As of the afternoon of November 3, the USD/TRY was up 0.1% to 18.62 from 18.6 on October 27.

On September 28, Turkey’s president, Recep Tayyip Erdogan, said during a televised interview that he was intent on the policy rate settling in the single digits by end-2022.

On November 24, at its next rate-setting meeting, Turkey’s monetary policy committee (MPC) is expected to cut the policy rate by another 150bp to 9%. As a result, the benchmark will fall into the single digits and with Erdogan at the helm it is expected to stay there.

Turkey’s policy rate in reality remains idle on the sidelines while the government controls the monetary conditions via macroprudential measures and non-capital controls.

On November 2, the US Fed delivered a 75bp hike, bringing its policy rate to 3.75-4.00% in line with market expectations. As things stand, the market expects a 50bp increase on December 14.

November is a clear candidate for some very serious turbulence on the financial markets.

Turkey’s five-year credit default swaps (CDS) remain below the 700-level, while the yield on the Turkish government’s 10-year eurobonds remains above the 10% level.