TURKEY INSIGHT: Rate-setters decide this is no time to cut 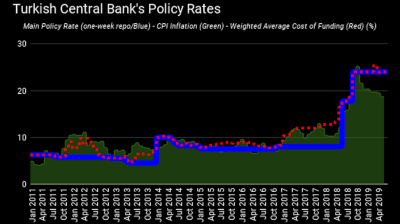 Turkey’s central bank on June 12 announced that a meeting of its monetary policy committee (MPC) has opted to keep its policy rate (the one-week repo auction rate) at 24%, where it’s been for nine months.

“Recently released data show that the rebalancing trend in the economy has continued. External demand maintains its relative strength while economic activity displays a slow pace, partly due to tight financial conditions. The current account balance is expected to maintain its improving trend,” the MPC said in a statement.

The MPC’s decision was in line with market expectations. Few economists expected the national lender to take the risk of introducing an unexpected rate cut ahead of the controversial Istanbul mayoral revote—interpreted by many as another referendum on the Erdogan administration—to be held on June 23.

The next MPC meeting will be held on July 25.

Inflation data doubts grow
Given as 18.71% in May, official consumer price index (CPI) annual inflation in Turkey has stayed below the policy rate since last November (although the number of those who trust the veracity of the official inflation figures is patently declining) and certain market participants (who only pay attention to the macro data without having any real insight on what is occurring under and alongside the official figures) initially expected significant rate cuts in the second half of this year due to the falling official inflation rate—which hit a 15-year peak of 25.24% in October—and a deepening recession.

However, the Istanbul re-run and rising tensions with the US over Ankara’s insistence that it will go ahead with a deployment of Russian S-400 air defence missile systems, said to pose a threat to the security of Nato military hardware, such as the F-35 stealth fighter jet, unsurprisingly limited the MPC’s scope for a rate cut. If the tensions were not showing any particular impact on the Turkish lira, officials would have found some other reason to put off a rate cut since the fundamental dynamics in the economy do not show any signs of a recovery.

Although the headline macro figures paint a path to recovery, the Turkish economic reality does not offer any real hope of a recovery in the short term.

Observers see the government as still focused on ad hoc efforts such as manipulating the dollar/Turkish lira (TRY) rate or cooking the inflation figures. The Erdogan administration is not sending any signals indicating that it might launch a recovery plan with real substance. Instead it rather prompts fresh loan cycles to keep zombie companies in the game.

It is at the July 25 meeting that the latest lira and S-400 situations will drive the rate-setters’ decision-making. Helpfully, Washington has issued an ultimatum to Ankara that gives it until five weeks after the Istanbul revote to decide whether it will defy the US and Nato over the S-400s.

The TRY has been trading just below the 5.80 level against the USD since the week-long Bayram break that Turkish workers took last week, but the rate is obviously synthetic. Market commentators’ attempts to offer conventional explanations for the lira’s movements, tagging it to the news flow, fall short of logically explaining the situation. That’s been more and more the case since last November when the government moved in to boost its behind the scenes control of the currency.

Although the S-400 ultimatum, delivered in a letter from the acting US defence secretary to his Turkish counterpart at the end of last week, has not significantly hurt the lira, there is still the potential for it to do so as the ultimatum deadline is July 31.

The US Senate and House of Representatives, as well as top officers at the Pentagon—in fact basically everyone in the US establishment except Donald Trump—have been pushing the threat of sanctioning Ankara if it flies in the face of the US demand that it scraps the S-400 order placed with the Kremlin. Turkish officials, meanwhile, are feeding hopes that a scheduled Recep Tayyip Erdogan–Donald Trump meeting on the side-lines of the G20 meeting to be held in Osaka on June 28-29 can work the situation out to everyone’s satisfaction.

Meanwhile, the Russians continue to enjoy the S400 row and ply it for all it’s worth in upsetting the Nato alliance. One day a Russian officer says the missile deliveries have been delayed to August, the next day a different Russian official says they will be be made in July.

Back in the lira market, Turkey’s public lenders are said to remain active while the latest rate cut signalling from the Fed, along with the woes in South Africa, are said to have helped the Turkish government strengthen the lira ahead of the Istanbul revote.

The South African rand and Turkish lira are negatively correlated, while both governments do their damndest in hurting their countries’ economic outlook long term. Lately, there has been talk that the South African government has managed to spook investors into opening a long lira position against the rand.