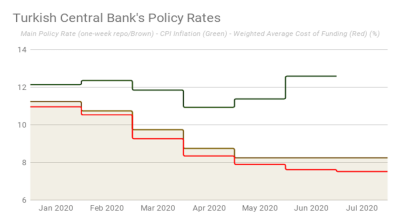 The last two rate-setting meetings of the authority have kept the headline policy rate (one-week repo) unchanged at 8.25% since June. However, this does not mean that the national lender’s open market funding rates remain unchanged since its main policy rate has not been its main funding channel for a while now, BloombergHT noted.

The media outlet also recapped on how the significance of the one-week repo rate as the policy rate has declined since Erdem Basci, the first of the central bank’s run of three ‘non-central banker’ governors, introduced the so-called interest rate corridor in 2011.

Within the interest rate corridor, introduced into central banking literature by Basci, the Turkish central bank used to push local lenders to borrow at its overnight borrowing window while offering limited funding in its one-week repo auctions. Later down the line, the late liquidity borrowing window was also added to the corridor.

BloombergHT also recalled how the corridor policy was criticised as “complicated” until it was temporarily lifted in May 2018.

Coincidentally, the USD/TRY rate started breaking historical records in May 2018, commencing a trend that spiralled downwards until it ended in the August 2018 Pastor Brunson Turkish lira crash (Donald Trump’s decision to bring in sanctions to crank up the pressure on Erdogan to release the detained American evangelical minister was a key factor in tipping the lira over the edge).

With the arrival of the COVID-19 crisis, Turkey’s monetary policy has entirely gone off the rails, with the central bank presently using six different funding rates.

The problem with relying on the weighted average cost of funding data provided by the central bank in analysis is that it does not include all funding channels, including swaps.