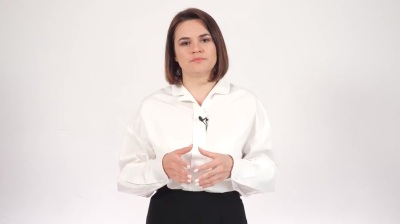 Tikhanovskaya calls for European-wide show of solidarity with Belarus on May 29
By bne IntelliNews May 26, 2021

Belarusian opposition leader Svetlana Tikhanovskaya has called for a public Europe-wide show of solidarity with Belarus on May 29.

“I call on the international community to join the Global Picket of Solidarity with Belarus on May 29. We need your support. Tell your friends & the whole world about the repressions in Belarus, about political prisoners, about Raman Pratasevich, Sofia Sapega. #StandWithBelarus,” Tikhanovskaya said in tweet.

The presidential candidate, who is widely believed to have won the August 9  presidential elections but was forced to flee the country a few days later by Belarusian security services, also released a video in English in her tweet explaining why it was important for the rest of Europe to stand up and  be counted.

“On that day, May 29, my husband and prominent blogger, Sergei Tikhanovsky, became the first imprisoned presidential hopeful,” Tikhanovskaya said. “And it sparked the solidarity chains and peaceful protests across the country. That is where the harshest repressions in the history of modern Belarus started.”

“To mark this turning point and express solidarity with Belarusians I announce the global solidary with Belarus on May 29,” Tikhanovskaya added.

She went on to list various ways people could get involved, calling for demonstrations, for people to send letters to Belarusian political prisoners, for children to make postcards and for the façades of buildings to be light up in the opposition colours of white-red-white, amongst other things.

“Let's show that the world stands with Belarus,” Tikhanovskaya concluded.

The Belarus protests have fallen off the front pages in recent months as the winter seasons stopped the dramatic mass marches across the country. But the Belarusian story was dramatically catapulted back to the top of the news agenda by the arrest of Roman Protasevich after a MiG jet fighter was sent to force a commercial Ryanair passenger plane to land in Minsk on May 23, where the former editor of the Nexta opposition channel was arrested.

Tikhanovskaya is clearly hoping to reignite popular and public support for her cause and emphasised her story as the revolutionary housewife that threw the regime of the so-called last dictator in Europe, Belarus' President Alexander Lukashenko, onto its back foot, with her bravery and dogged determination.

Canadian mining company Gabriel Resources, which has a mining licence for Rosia Montana, sued the Romanian government after it asked for the area to be added to the UNESCO world heritage list.