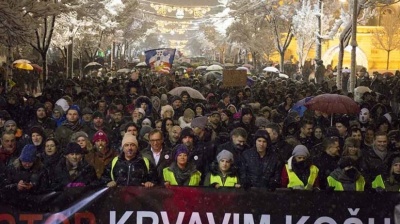 Thousands of people gathered in Serbia’s capital Belgrade to protest against what they say is the autocratic rule of President Aleksandar Vucic on December 15 – the second rally against the president staged this month.

The protesters are demanding Vucic’s resignation. Protests were originally triggered by an incident involving Borko Stevanovic, a leftist political leader, who was beaten along with his associates by unknown attackers.

However, the demands have expanded from calling on the authorities to discover the attackers, to a broader expression of dissatisfaction with Vucic’s style of government.

Following the first protest on December 8, Vucic said that he will not fulfil a single demand from the opposition even if five million people go out the streets. “#1 of 5 million” was the main poster on the December 15 protest, a photo published by b92 showed.

“Without shame the regime is “patriotically” robbing,” another poster reads. Protesters say they were "slaves of the regime" for years and will not give up until Vucic steps down.

Among other demands were calls for a better police force, higher state security, and better healthcare.

Although Vucic said he will not meet any demands, on December 8 local media quoted him as saying that he may call yet another early general election in spring 2019.

Although Vucic’s ruling Serbian Progressive Party (SNS) has been the largest party in the Serbian parliament for years, Vucic has repeatedly resorted to snap elections to strengthen his position.

The president asked all the party’s bodies to be ready for an election.

Unofficially, Vucic told the party’s leadership that he "will not tolerate the pressure and blackmail of the street protestors, particularly at a time when tensions with Kosovo are on the rise.”

If the election takes place, this will be the fourth election since the SNS came to power in 2012. The previous, also snap, election was held in April 2016 and a new regular vote is due in 2020.

New coronavirus cases decline across emerging Europe but the epidemic’s not over yet
Tensions between Bosnia, Montenegro and Serbia rise over closed borders
CONFERENCE CALL: 5G to turbocharge post-COVID recovery