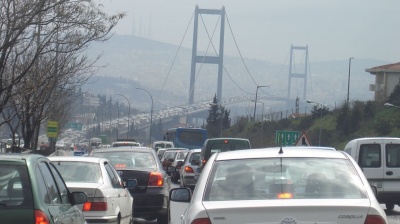 Traffic on the Bosphorous Bridge.
By bne IntellIiNews March 10, 2020

Istanbul, Turkey’s largest city with a population of nearly 16mn, has experienced severe traffic congestion over the past couple of days caused by people avoiding public transport because of coronavirus anxieties. The situation has occurred despite officials claiming the country is yet to record a single infection of the virus.

“We have seen a sharp increase in the number of people who are using their cars to commute between work and home,” said the head of the Istanbul Taxi Operators’ Association.

One inner-city bus driver agreed. “I have seen fewer and fewer people using public transport over the past week. Students too have disappeared,” said the driver, who works one of the busiest lines in the city.

With far more cars hitting the roads, people are struggling to find parking spaces in the megacity.

Car rental companies are likely one big beneficiary of the growing public anxiety.

“People who do not own a car but do want to use public transport will increasingly turn to car rental companies. Our business will boom,” commented Inan Ekici, head of the Car Rental Companies’ Association.

The official narrative remains that Turkey is yet to log a single coronavirus infection—but many people on social media are sceptical (though the number of those expressing scepticism may have been curbed in recent days since officials said the security services would potentially investigate anybody suspected of damaging national security by questioning the coronavirus situation in the country).

The sceptics ask how Turkey could be so lucky when neighbouring countries Greece, Bulgaria, Georgia, Iran and even breakaway Turkish Cypriot de facto state Northern Cyprus have already reported cases—and in Iran’s case the outbreak is the world’s third worst with 8,042 cases by March 10.

Turkish Health Minister Fahrettin Koca on March 9 reaffirmed that Turkey is officially corona-virus free, with all 2,000 people tested for the illness so far having received a negative result.

Koca did however on March 10 warn that the possibility of the coronavirus having already reached Turkey was very high, saying: “Europe is very late in taking measures [to contain the epidemic] and it is still being too slow. It is highly likely this outbreak is currently in Turkey.”

The European Bank for Reconstruction and Development (EBRD) and JPMorgan have launched an advisory support programme in Istanbul that provides access to knowhow to selected women entrepreneurs in ... more