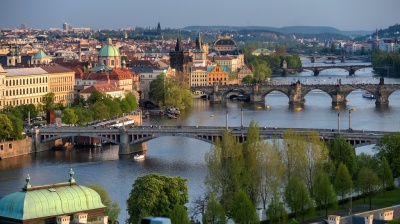 Apartments in tourist hotspots like Prague (pictured) and Budapest are being bought as tourist lets, driving up prices for locals.
By Clare Nuttall in Glasgow December 18, 2019

Fears that a bubble was growing in the Central European real estate sector appear to have been averted, as growth in residential property prices has started to slow across much of the region.

Prices are still growing fast, with the growth in several Central European countries outstripping that in Western Europe. In the second quarter of 2019 Hungary topped Eurostat’s house price index intended to capture price changes of all residential properties purchased by households, followed by Latvia. Czechia, Lithuania, Slovakia and Bulgaria were also among the top 10 countries for upward price moves.

However, reports from several markets in the region since then indicate a slowing of growth and expectations of a further easing in future.

Knight Frank, which uses different methodology from Eurostat, puts the Czech Republic at the top of the fastest growing CEE markets in its Q2  Global House Price Index, though at 9.4% y/y growth in home prices was considerably slower than the 12-14% reported in the fastest going markets a year earlier. According to the real estate firm’s index, growth has slowed in the markets that were the fastest growing last year — Latvia, Slovenia and Hungary.

“More countries and territories are seeing price rises year-on-year than at any time in the last decade but the average rate of growth is slowing significantly as global uncertainty impacts,” commented Knight Frank on releasing its latest index that has seen a slowdown in annual growth for six consecutive quarters.

“In Europe, slower growth is a common theme but some interesting trends stand out … Central and Eastern European countries continue to perform strongly – The Czech Republic (9.4%), Hungary (9.2%) and Bulgaria (7.3%),” it said.

A combination of factors have been causing prices to rise. The economies of the region have been growing fast, in general outstripping the eurozone average in the last couple of years. While they are experiencing some slowdown as a result of the slowing of key European economies in particular Germany, growth remains propped up by private consumption.

Demographics have a mixed impact. Overall, populations are declining in most countries in the region, with mass emigration leaving abandoned homes and villages in rural areas. Yet major cities are booming amid the ongoing migration to urban areas and the growth of industries such as IT and tech. And when emigres do choose to put money back into their home economies, residential real estate is a popular way to do this. Residential real estate as an investment is becoming popular for locals as well.

Then there is the booming tourist industry in cities like Prague and Budapest that has resulted not only in a wave of investments into hotels but also the conversion of thousands of city centre apartments into short term holiday lets — most listed via the Airbnb platform — further fuelling prices and pricing many locals out of the market.

Economists from the Vienna Institute for International Economic Studies (wiiw) believe a bubble has formed in the sector, but not a dangerous one.

In recent years, “A lot of private investment was directed not into proactive capacity, but into real estate markets,” said wiiw economists during a webinar in November. “Practically everywhere [in Central Europe] real estate prices are rising much faster than consumer prices. In Hungary the growth has been extraordinary at almost 90% over the past five years.

“Is this a bubble? Yes, but we don’t think it will burst tomorrow or the day after tomorrow.”

House prices continued to rise in double digits in 1H19 in Hungary as demand remained strong fuelled by rising income and low interest rates, according to the latest sectoral report from the National Bank (MNB). Hungary has also been one of the EU's fastest growing economies in recent years.

The demand side of the housing market is supported by high employment, expanding real incomes, high level of savings and the low interest rate environment, according to the MNB, as reported by bne IntelliNews. The central bank warned of a steep drop in supply from 2020-2021 due to strong cost-side pressure and a change in the VAT rules effective from January 1, 2020.

An Organisation for Economic Co-operation and Development (OECD) house price to income index, intended as an indicator of affordability, finds the gap between the two to be the second highest across the organisation in Hungary, after Canada.

In its biannual Financial Stability Report released on December 4, the MNB noted a potential overvaluation of home prices in Budapest among the risks facing the banking sector, though it added that lenders' exposure to changes in the real estate market is low.

Prices in the Czech Republic, especially the capital Prague, have been driven up by the economic growth and its growing popularity among tourists, leading to talk of overheating. However, looking ahead, analysts are forecasting a slowing of house price growth.

“Despite some slowdown from the 13% peak seen in 2017, Czech property price growth has remained solidly above the EU28 average growth of 4.4%,” said ING chief economist Jakub Seidler in October as quoted by Czech News Agency (CNA).

He added, “Asking prices in 3Q19 signal that real estate price growth will very likely slow in the months/quarters ahead. This is not only because of the CNB measures but also because of the generally high level of property prices relative to household income following rapid growth in the last four years (40% increase since 2Q 2015).”

Several of the smaller CEE countries have also been among those with the fastest rising prices in the last couple of years.

Slovenia topped Knight Frank’s list of the fastest growing markets for several quarters, but home prices started to level off in the first half of 2019, following three years of heady growth that started in 2015 when the sector finally revived following the international economic crisis. According to local media reports, the current slowdown in growth stemmed from a stagnation of prices in the capital Ljubljana while prices along the Adriatic coast are still rising fast.

In neighbouring Croatia, the International Monetary Fund (IMF) warned on December 16 of the impact of rising prices in the capital and coastal areas, as Croatia’s economic recovery from a long and deep crisis continues. “Although there is little immediate cause for concern, it is important to ensure that these developments do not germinate future problems. The housing markets need continuous close monitoring to guard against too much household borrowing which could be particularly damaging for lower-and middle-income households,” the IMF said.

Bankers surveyed by the Bank of Lithuania for a report published in July named real estate bubbles as one of the two biggest threats facing the country’s financial system this year, along with cybersecurity.

A statement issued by the central bank in November says that while "the RE market shows no evident signs of overheating, it is essential not to ignore potential risks, especially in cases where housing purchased for investment purposes is acquired with borrowed funds”. This is partly fuelled by the increasing number of properties bought to rent out, including for short term holiday lets, in major cities Vilnius, Kaunas and Klaipeda, but eased by the growth of the housing supply.