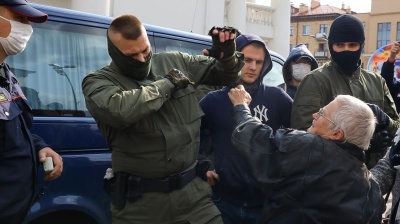 Some 10,000 women marched on September 12 and had to face the increased violence of the OMON but countered it with shrieks and ripping their masks off / wiki
By Ben Aris in Berlin September 13, 2020

“You shall not pass!” chanted the shrieking women as the OMON riot police tried to push at least 20 women out of the way of a van full of detainees.

The women were shrieking, an otherworldly sound that is not screaming. They showed no fear as the OMON loomed over them. But the shrieking that has become part of the standard armoury in the weekly female-only protests every Saturday clearly unnerves the OMON, who don't know how to deal with the women.

Again the OMON tried to shove the women out of the way of the van that was trying to leave with its cargo of protestors. The women had bound themselves into a block with tightly linked arms and hugging each other to prevent the OMON from breaking up the body of women blocking the road. As the OMON pushed against the women hands immediately shot out, grasping at their masks, trying to rip them from the faces of the balaclava-wearing officers.

This is another tactic that has appeared in the last week: unmask the OMON and then post their identity and their crimes online: it has proved to be extremely effective, and once the mask is off the officers tend to turn tail and flee. The OMON backed off, defeated. The women were not going to be moved. “You will not pass!” they began to chant in unison.

A pro-government rally organised the same day to counter the women’s march drew a few hundred people at best and only highlights the illegitimacy of the elections where Lukashenko claims to have won over 80% of the vote.

Violence escalated at the “Loudest March of the Women” demonstration on September 12 in Minsk. An estimated 10,000 turned out in the capital, with smaller rallies held in solidarity in various regional towns.

With Belarus' self-appointed President Alexander Lukashenko due to meet with Russian President Vladimir Putin on September 14 to discuss the deeper integration between the two countries, the Belarusian incumbent wants to show he is in control of the situation, so the OMON were out in force.

The level of violence is ticking up steadily each week and the OMON crossed a new line when they broke the previous taboo and began arresting women earlier this week. Previously they had not dared touch them and the women used their immunity to form phalanxes around men the OMON were trying to detain to protect them.

But as the Loudest March got underway the OMON quickly appeared and began detaining protesters hoping to deter the would-be participants. More than 100 were herded into the waiting paddy wagons. One woman was brutally bodily thrown into the van as the officers tried to deal with a hoard of shrieking women trying to rescue their co-protesters.

The arrests are rising again, with over 600 in the last week and at least another 100 women arrested on September 12, bringing the total that have been taken into custody since the protests began just over a month ago to more than 10,000, according to NGO estimates.

As the numbers of demonstrators swelled the OMON were quickly overwhelmed. Clashes became more frequent but less effective. In another incident three officers walked into the crowd intent on snatching demonstrators only to find themselves surrounded by clawing hands, trying to rip off their balaclavas, before they were forced to beat a humiliating retreat.

The women have lost all fear of the authorities. The OMON have been defanged by their obvious discomfort with the shrieking women clawing at their faces. And they clearly worry about being doxxed by the crowd. In an incident early this week one officer was caught on film violently trying to pull a protester out of the crowd and taking swings at the people hanging on to the man until someone ripped his mask off. Within hours the officer’s profile was posted online, complete with pictures, including his wedding picture with his wife, and listing his address and telephone number.

And the “face and shame” campaign that has rapidly built up momentum in the last few days could go to a whole new level in the next weeks. The Telegram channel Nexta announced that a hacker group had managed to get into the Ministry of the Interior’s system and the channel has been given a database listing the ministry’s entire staff, including all the police and OMON’s personal details, that it is threatening to publish if Lukashenko doesn't resign. 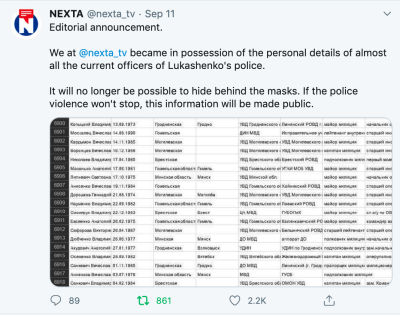 Belarus is a small country with just under 10mn people. There are only a few degrees of separation between the officers and the rest of the population and the state’s forces are clearly already worried about being outed.

In another incident a plainclothes officer was ostentatiously filming the faces of a crowd of women, a tactic long used by the authorities to intimidate demonstrators, when instead of backing off the crowd of women began to advance on the officer.

One middle-aged women stepped out of the crowd and walked up to the officer holding her hand in front of his lens, forcing him to back away. Then another grabbed him from behind and ripped his mask off. When a secret service colleague tried to step in to help him they were quickly mobbed by the women and beat a retreat as the triumphant women chanted: “Get out of here!”

The now iconic “badass Belarusian babushka” Nina Bahinskaya, a 73-year-old pensioner, who has been protesting against the Lukashenko regime for years, was in the vanguard at half a dozen clashes with OMON throughout the day.

The police have clearly been given orders not to arrest her, as she would be too potent a symbol of the state oppression. Her diminutive size and her totally ineffectual efforts to roughhouse the OMON, who effortlessly bat her assaults away like an annoying fly, would make her arrest look ridiculous.

But at the same time she has become a hero of the revolt as she fearlessly marches into the OMON and tries to tear off their masks, shouting and scolding them all the while. As she is so small, if she can’t reach their faces she contents herself with kicking them in the ankles. The crowds of women at her back chant “Nina!” and other women dive in to rescue her if the OMON offices are too aggressive.

Like the rugby scrum of women that blocked a paddy wagon from leaving with its detainees, Nina blocked another by herself, standing in the road in front of it, in an image of the “tank man” from the Tiananmen Square protests in China in 1989, until the OMON drivers were forced to get out of the truck and physically move her to one side.

A German journalist caught up with Nina just before midnight and ask her if she was tired. “Pah! She replied.

“I'm not afraid,” she said of the OMON. “These are young men, they sell their souls to the devil. Their wives and children will never forgive them… What should I be afraid of? Death? I know that I will go from this earth,” she told Alice Bota in Minsk, adding that she was there to “help the young people.”

Belarus expands its use of the death penalty
15 hours ago
The Mariupol siege is over as the last Azov defenders surrender
1 day ago
Kyrgyzstan: Eccentric health minister fights for his job amid claims of corruption and bullying
1 day ago
Azov commanders have remained behind in the Mariupol steelworks to continue the fight
1 day ago
Russia hopes Chinese carmakers will help revive Moskvitch brand
1 day ago