Tens of thousands protest against changes to justice laws in Romania 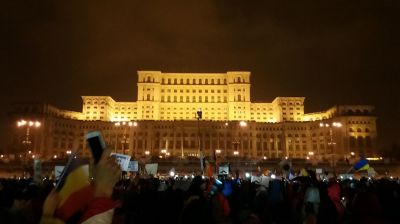 Tens of thousands of people protested on January 20 in Bucharest and other Romanian cities, with the number of participants estimated at more than 50,000 in the capital alone.

They took to the streets in protest against justice bills recently adopted by the parliament and the planned changes to the criminal code and criminal procedure code, which are seen as weakening the independence of the judiciary and Romania’s fight against corruption.

Violent incidents were reported between riot police and some of the participants who were trying to break the police chain. Video footage published by local media shows a member of the gendarmerie hitting one of the protesters.

Romania has been the scene of anti-corruption and anti-government protests for a year, with the biggest rallies being organised in February last year, when more than half a million Romanians demonstrated to show their discontent with the government’s move to change criminal legislation which would have partly decriminalised abuse of office.

The latest protest was organised against the background of the latest changes to the Romanian government, the third in only one year. Former prime minister Mihai Tudose had resigned just days before, following rising tensions with the powerful leader of the ruling Social Democratic Party (PSD), Liviu Dragnea. The PSD’s proposal for the premier post, and the president’s nomination, Viorica Dancila, is a supporter of the so-called reform of the justice system.

The protest on January 20 started in University Square in Bucharest and the tens of thousands of participants marched to the parliament in heavy snow and freezing temperatures. The participants carried Romanian and EU flags and chanted slogans such as “PSD, the red plague,” “We don’t want to be a nation of thieves,” and “Resignation”.

In front of the Palace of the Parliament, protesters illuminated the square by lighting their mobile phones.

The protest was organised, like before, on Facebook. It was attended by participants from other cities, who travelled to Bucharest. A group of five people from Cluj Napoca travelled almost 500km on foot for 11 days to attend the Bucharest protest, according to local newswires.

“They have destroyed this country, their only focus is to let criminals free despite all criticism from the EU and US. Moreover, prices have gone up, Romania’s debt is increasing. This is a long way from what they have promised,” a protester told bne IntelliNews.

Smaller protests were organised in Cluj Napoca, Timisoara, Sibiu, Iasi and other cities.

Romanian lawmakers adopted three controversial bills on the country’s justice system in December. The changes they would make include setting up a special unit to investigate judges and prosecutors, and stricter conditions for joining the National Anticorruption Directorate (DNA) and the Directorate for Investigating Organised Crime and Terrorism (DIICOT). The laws will be sent to President Klaus Iohannis for his endorsement.

The planned changes to the criminal codes have been criticised by the DNA, which warned in December that they will have “a devastating effect on criminal investigations”, claiming they will eliminate "indispensable legal instruments" needed to carry out investigations.

In addition, the Bucharest embassies of Belgium, Denmark, Finland, France, Germany, the Netherlands and Sweden have urged the Romanian government “to refrain from any action resulting in a weakening of the independence of the judiciary and the fight against corruption”. The changes to Romanian justice laws have also been criticised by the European Commission, the US State Department and magistrates.