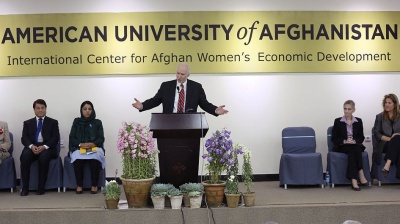 The new era of university life in Afghanistan that arrived after the US invasion is over. / Employee of U.S. Department of State,public domain
By bne IntelIiNews August 29, 2021

A medical physicist at Tehran University of Medical Science, who also works as a lecturer in Kabul, is among scientists who fear that the new Taliban regime in Afghanistan will not prioritise research, or recognise its value, and that international funding for scientific research in the country could dry up if the international community does not accept the country’s new government as legitimate.

Musa Joya told Nature that he was planning to return to Kabul next year to work at a radiotherapy centre supported by the International Atomic Energy Agency (IAEA), but that those plans could be suspended.

“We spent all our money, energy and time in Afghanistan to build a brighter future for ourselves and our children. But with this kind of withdrawal [by the US and allies], they destroyed all our lives, all our hopes and ambitions,” Joya was reported as saying.

Joya, whose wife and children are still in Afghanistan, added: “I really see a dark future. I don’t know how to feed my family; how to rescue them; how to protect them.”

As a member of the Farsi-speaking Hazara community, Joya feels he could be a target. The largest share of Afghanistan’s population of 39mn, including many members of the Taliban, is ethnically Pashtun. Researchers from other ethnic groups risk persecution.

Kenneth Holland, a dean at O.P. Jindal Global University in Sonipat, India, was president of the American University of Afghanistan (AUAF) in Kabul in 2017–19. He told Nature that when he arrived in the country in 2006, he found “almost no research being done at universities; no culture of research”.

Since 2004, the World Bank, the US Agency for International Development (USAID) and other international organisations have poured hundreds of millions of dollars into Afghan universities to support teaching, faculty training and some research, with three dozen public universities established or re-established since 2010, and dozens more private universities set up.

The first Taliban government, which ruled the country from 1996–2001, brutally enforced a conservative version of Islamic Sharia law, characterised by women’s-rights violations and suppression of freedom of expression.

Academics who have not fled Afghanistan are among those who hope the Taliban will this time round run a more tolerant regime. But one Kabul-based scholar and member of the Afghanistan Science Academy, who did not want to be named, told Nature how this was the third time that he and his family, like many in Afghanistan, had lost everything. He fled during the unrest in the late 1970s ahead of the invasion of the Soviet Union; again in the late 1990s during the Taliban’s previous tenure; and is now considering fleeing once more. “It is a very difficult situation for a human being: you are born in war, you grow up in war and now you will die in war,” he said.