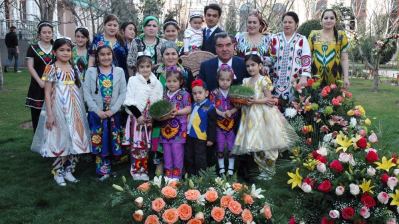 The main intrigue will unfold when the Rahmon vacates the presidency for his eldest son Rustam or any of his other eight offspring.
By Naubet Bisenov in Dushanbe May 20, 2016

Tajik citizens will vote in a referendum on May 22 to approve amendments to the constitution that would allow President Emomali Rahmon to stay in power for life and start a ruling dynasty.

With his major opponent destroyed – the Islamic Revival Party of Tajikistan, until its ban in autumn 2015 Central Asia’s only Islamic opposition party – the referendum looks certain to install the president’s family in power for the foreseeable future and thus put an end to guesswork on who will succeed Rahmon. Questions remain, however, over whether the heir-designate will be able to consolidate power as successfully as Azerbaijan’s President Ilham Aliyev did upon his father’s resignation due to poor health in October 2003.

The referendum on making over 40 amendments and addenda to the Tajik constitution, which was adopted in 1994 and has already been amended in 1999 and 2003, seeks to abolish a two-term limit for Rahmon, who was designated as the “Leader of the Nation” last December with lifelong immunity from prosecution, and allow him to stand for president indefinitely. At the same time, should the incumbent decide to step down aged 68 in time for the next presidential election in 2020, the amendments will cut the age limit from 35 to 30 and will thus enable Rahmon’s eldest son Rustam, now 28, to step in as successor to his father.

In abolishing the two-term limit for himself, Rahmon is copying another of the region’s dictators, Kazakhstan’s Nursultan Nazarbayev, who was designated the “Leader of the Nation” in 2010 and had the two-term limit abolished for himself in 2011. However, unlike Nazarbayev, Rahmon has gone one step further and indirectly indicated that he had chosen his son Rustam as his successor, saving Tajikistan watchers from the guesswork on who the successor would be.

The previous two sets of constitutional amendments – one to increase the presidential term from five to seven years in 1999, and the other to increase the number of terms from one to two in 2003 – were approved by 75.3% on a 92.5% turnout and 93.82% on a 96.39% turnout respectively. But despite expectations of another overwhelming approval of the amendments, the May 22 vote will be carried out in an atmosphere of voter apathy as ordinary Tajiks are grappling with economic problems caused by the regional slowdown, especially in Russia, which is the main source of investment, remittances and trade for Tajikistan.

“Tajik society has been engulfed by apathy and fear, which is why in my opinion many people are indifferent to the ongoing political processes, including the forthcoming referendum on constitutional changes,” Nurali Davlatov, a political commentator for the independent Ozadogon newspaper in Dushanbe, tells bne IntelliNews. “Independent media outlets practically ignore this problem in order to avoid undesirable consequences.”

“I don’t care about the referendum or who is in power unless they improve people’s lives and create jobs,” Aziz, a 37-year-old jobless resident of Dushanbe with two higher educations, complains to bne IntelliNews. “The only thing I know is Rahmon wants to establish a dynasty.” Like many other residents of Dushanbe, Aziz said he would not take part in the May 22 vote.

Davlatov echoes the widespread opinion on Dushanbe streets: “The May 22 referendum, like the previous ones, I believe, is being held to allow Rahmon, to become, at least, a life-long president and, at most, a founder of dynasty.”

“It is clear that the intended reform aims at facilitating the access to power of Rahmon’s son, Rustam. I see this as part of a process of elite reshaping, in which the progressive exclusion of the Islamic Revival Party from Tajikistan’s political arena goes hand in hand with the emergence of the presidential son as a future leader,” Luca Anceschi, senior lecturer in Central Asian studies at the University of Glasgow, tells bne IntelliNews. “Together, these two strands are respectively intended to consolidate Rahmon’s present power while eliminating future threats.”

The closure of the Islamic Revival Party has given rise to concerns about political stability in the country where the region’s only Islamic-leaning opposition was allowed to operate as a result of power-sharing peace deal that ended a bloody civil war between Rahmon’s regime and Islamic rebels in 1992-1997.

With the destruction of the Islamic Revival Party (IRPT) and banning it as “terrorist” last autumn, Rahmon has eliminated any serious challenge to his rule in the country. “There are no obvious forces that present a threat to the regime of Rahmon’s personal power in the country,” Davlatov says. “There has emerged an opposition to the current rulers of Tajikistan abroad. Being outside Tajikistan, they present no real threat to Rahmon.”

The main intrigue is, however, going to unfold when the senior Rahmon will eventually vacate the presidency for his eldest son Rustam or any of his other eight offspring: in a bid to further consolidate the family’s grip on power, the president appointed Rustam to head the anti-corruption agency in March 2015 after two years at the helm of the customs service, while Rahmon’s eldest daughter Ozoda was appointed chief of the presidential administration in January 2016; before the appointment Ozoda had served as deputy prime minister since May 2014.

“This opens up a very interesting scenario for Tajik politics, in which succession is to be arranged through a hereditary mechanism similar to that which emerged in Azerbaijan. The relative success of the Azerbaijani model was built on the oil largesse and consequential elite cooption capability of the regime in Baku,” Anceschi suggests. “But I am not entirely sure Tajikistan’s struggling economy will provide a post-Rahmon regime the same resources available to [Azerbaijani President Ilham] Aliyev.”

Uzbekistan: People no longer in the dark about power shortages

Uzbekistan: People no longer in the dark about power shortages
Norwegian Refugee Council calls on world to help Iran deal with hundreds of thousands of fled Afghans
bneGreen: Development banks ADB, EBRD, EDB up the ante at COP26