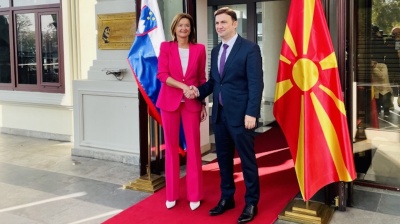 The membership of North Macedonia in the EU by 2030 is a realistic and achievable goal, Slovenian Foreign Minister Tanja Fajon said on October 18 in Skopje.

Slovenia is one of the strongest supporters of North Macedonia’s EU accession process. During her visit in Skopje, Fajon met Foreign Minister Bujar Osmani and other officials.

“I am aware that the beginning of the process was painful and difficult, but now it is necessary to focus on the reform process, which is to the benefit of all citizens,” Fajon said, adding that the country should amend the constitution to be able to progress further on its EU path, according to the statement from the Slovenian foreign ministry.

There is strong opposition within North Macedonia to some of the changes the country must make to progress with accession negotiations.

Fajon said that Slovenia will continue to help North Macedonia on its European path.

Fajon and Osmani assessed that cooperation between the two countries is very good, especially in the political and economic fields.

"I would like the annual exchange of goods between Slovenia and North Macedonia to be raised to €500mn. I am ready to help Slovenian companies on the markets of North Macedonia," Fajon said in a tweet after meeting North Macedonia’s Deputy PM for Economic Affairs Fatmir Bytyqi.

The country now called North Macedonia has been an EU candidate country since 2005, but its process towards accession has been repeatedly delayed by bilateral disputes with its neighbours. First Greece and later Bulgaria used their veto powers as EU members to block the country’s EU path unless it made concessions to them.

This is on top of the border slowing of the engagement process in recent years amid ‘enlargement fatigue’ among existing EU members, with no state admitted to he union since Croatia in 2013. North Macedonia and other Western Balkan states are also a long way behind their peers in Central Europe economically.

However, following Russia’s invasion of Ukraine in February there has been an effort to revitalise the process. Both Moldova and Ukraine were given candidate status at the EU Council meeting in June, while Albania and North Macedonia were finally allowed to start membership negotiations.