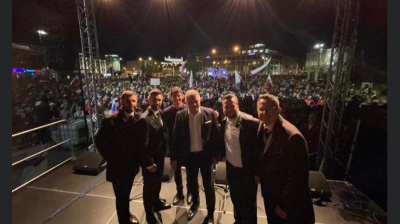 Robert Fico (fourth from left) and other Smer party leaders at the rally on Tuesday in Bratislava's Hodzova Square. / Smer
By Albin Sybera September 21, 2022

Slovak Prime Minister Eduard Heger's minority government has managed to open a parliamentary session after the opposition Smer party of ex-premier Robert Fico backed the move. Heger’s cabinet had failed to secure majority of deputies (76 of 150) to open a session on two previous occasions, casting doubt on its ability to govern and pass measures to combat the energy crisis.

“Fico is more likely to keep his word than [Richard] Sulik”, Finance Minister Igor Matovic (of the populist OLaNO party) told Slovak media in yet another lash out at his former coalition partner, the leader of the  rightwing SaS party. The rift between the two politicians is at the core of a months-long cabinet crisis which climaxed in SaS leaving the cabinet early in September.

The SaS had demanded Matovic's resignation as a condition for staying in the government. Matovic could still face an SaS-backed attempt to be removed by parliament majority, but the question is whether Smer would support such move or would rather wait for a more propitious time to bring down the government and hold early elections.  The dismissal of Matovic might actually reinforce the goverment by allowing the SaS to re-enter the cabinet.

Parliamentary Speaker Boris Kollar, chairman of the radical rightwing populist Sme Rodina (We are family) party, the other main party in Heger’s coalition, made a concession to Smer-SD in order to secure its backing for the parliamentary session. Smer-SD had insisted the debate on a constitutional amendment to enable cabinet terms to be shortened by a referendum was discussed first.

Earlier this month Slovak President Zuzana Caputova confirmed she will call a referendum after a Smer-instigated petition demanding the cabinet’s dismissal collected more than 350,000 signatures. However, she also referred the question of cabinet’s demise to the Constitutional Court to assess whether it is compatible with the Slovak Constitution which defines the duration of cabinet terms.

Fico is trying to exploit the cabinet infighting and the energy crisis to engineer a return to power. The leftwing populist leader, who is facing charges of criminal conspiracy, was forced to resign in 2020 after the murder of investigative journalist Jan Kuciak cast a light on the corrupt relationship between politicians, businessmen and police, prosecutors and judges.

Approximately 5,000 people gathered on Tuesday evening outside the Presidential Palace in Bratislava city centre for a rally backed by Smer-SD. One of the speakers was Jozef Hambalek, who is on the EU’s sanction list for heading the Slovak branch of the far right bike gang the Night Wolves. Fico said the rally was inspired by the recent far right demonstration in Prague which, however, attracted a much larger crowd of 70,000.

The latest polls show Smer-SD is surging behind another leftwing opposition party, the Hlas-SD of former premier Peter Pellegrini,  followed by SaS.  Hlas has nearly 20%, with the leading coalition party, OLaNO, lagging far behind at 8%, while its former coalition partner SaS is at 13%.

Almost 60% of Slovaks would "certainly" or "probably" support a  strong and uncompromising authoritarian leader acting on the edge of democratic principles, according to the poll conducted for commercial TV Joj.

“Fabricated claims about the cemetery in Ladomirova serve as a tool of Russian propaganda in Slovakia”, read the ministry’s press statement.

In August, Fico’s Smer-SD invited Bratcikov to Zvolen to take part in commemorations for the Slovak National Uprising against the Nazi puppet regime in Slovakia.   Slovak neo-fascists still hark back to Jozef Tiso's fascist regime.

COMMENT: The new Cold War will be different, and not only because of China
EU and G7 agree on Russian petroleum product price caps
INTERVIEW: Helen Rodwell, head of CMS’ corporate practice in CEE