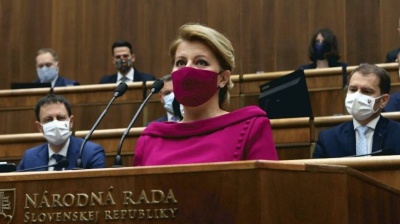 Slovak President Zuzana Caputova delivered her state of the republic address in parliament on June 5.
By bne IntelliNews June 8, 2020

Slovak President Zuzana Caputova delivered her state of the republic address in parliament on June 5, addressing many issues including the impact of the coronavirus (COVID-19) pandemic, the rule of law and solidarity, and criticising the poor condition of digital infrastructure and the Slovak economic model based on low pay and efforts to attract foreign direct investment which, she said, seems to have exhausted itself.

Caputova stressed that the fact that Slovakia is an “assembly shop for global carmakers” should be viewed as a transitional period that has had its pros, but there’s a need to move away from this by supporting the domestic business environment.

“For many years we’ve listened to statements about how vulnerable our economy is, as it’s too focused on the automotive industry, but it took the crisis to show us our vulnerability clearly. We've seen how many contractor companies have been shut down and how many people couldn't go to work because carmakers closed,” said Caputova, quoted by the Slovak News Agency.

“The [European] Commission concluded that our country had not taken advantage of the good times of economic growth and was lagging behind in areas that would be crucial to building prosperity in future. We lag behind in the quality of our public administration, the quality of public services, education and digitalisation,” she noted.

This was confirmed by the European Commission's (EC's) regular economic report on the country released a few days before the coronavirus outbreak. According to the report, the Slovak economy is no longer capable of growth without changes in its policies, particularly in public administration, education, science, research and innovation.

Despite stable but slower economic growth, low unemployment and modest inflation, the country is lagging behind in areas that are critical for future growth. Slovakia’s economic performance is gradually failing to reach the European average. It remains at around 75% of the EU average gross national income, the EC report read.

“The pandemic threat mobilised our society and produced another perspective on Slovakia – in a crisis, we can show support and solidarity. Individuals, entrepreneurs and non-governmental organisations showed exemplary initiative by acting quickly and selflessly to help Slovakia,” the president continued her speech.

She praised the work of scientists during the pandemic. “We can see it in the way they developed a Slovak test to detect COVID-19 in just a few weeks. This is further evidence that we have the potential to be more than just recipients of advanced technology from outside. We ourselves can offer cutting-edge technologies to the world.”

She also praised moves aimed at purifying the judiciary, as “we are witnessing the prosecution of several judges, cases that point to a long suspected problem of corruption in the judiciary, which is an especially severe problem because it is the judges’ job to provide justice and not use their function for their own enrichment.”

“Developments in these and other criminal cases involving public officials and their associates will be a litmus test for our development from post-communism to a strong rule of law,” she stressed.

According to Prime Minister Igor Matovic, Caputova’s speech contained less criticism than praise, while he considered the criticism appropriate.

He said that he noticed that a statement on introducing changes to how prosecutors' offices function and legislative processes ushering in such reforms "between the lines suggesting that a legislative proposal presented by an MP isn't considered to be an ordinary legislative course of action. If this is so, then the constitution needs to be changed to take the right to present laws away from MPs."