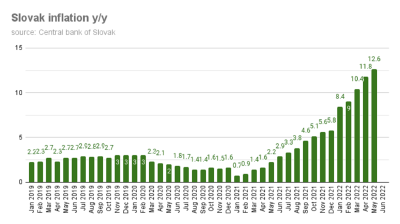 Food prices went up by 16.6% y/y in May, followed by a growth in housing and energy prices by 15.6% y/y in May. The consumer prices index recorded an annual growth of 12.5% in May for employee households, 13.5% for pensioner households and 12.7% for low-income households.

The Statistics Office also published figures on the development of April wages which, however, failed to keep up with the pace of inflation and recorded a real decline in seven monitored sectors. "In April, nominal monthly wages rose y/y in all the sectors monitored, but significantly slower than inflation. They rose the most dynamically in accommodation, almost by a third," said the statisticians.

If inflation is taken into account, real wages rose in only three of the 10 sectors monitored, mostly in accommodation, up by as much as 16%. Real wages dropped most markedly in the ICT sector by 7%, in selected market services by 5.7% and in transport and storage by 5.5%.