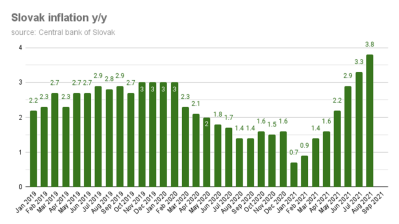 Slovak inflation level increased to the highest figure seen since October 2012, to 3.8% in August, driven by higher prices in transport, imputed rent affected by construction material prices and further increasing food prices, as stated in the Slovak Statistics Office report from September 14.

“While in the first few months of the year housing and energy prices dampened price growth, in 2H21 they are driving it up. Significant increases in prices of construction materials have already outdone the effect of a drop in energy prices from the beginning of the year,” the office said.

This was supplemented by more expensive fuels, with year-on-year growth above 20% for the fourth months in a row, the office added.

In month-on-month terms, the increase in consumer prices reached 0.4% in August, which was the lowest growth in four months. Consumer prices in household equipment saw a growth of 1.1%, transport prices increased by 1% and imputed rentals went up by 1.6% m/m.