Slovak industrial production up by 1.2% y/y in October 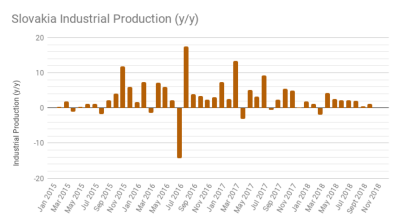 The growth was due to a growth in manufacturing (by 3.6%), a drop in energy supplies (by 12.6%) and mining and quarrying by (17.2%) y/y. Seasonally adjusted industrial output in October swelled by 0.9% month-on-month.

Exporting industries kept up a relatively strong y/y growth rate in October, although some of them showed signs of slowdown compared to 3Q18. Mechanical engineers remained the growth drivers with production increasing by 16.2% y/y.

Meanwhile, in 10M18 industrial production increased mostly as a result of increases in industrial manufacturing by 3.1%, decrease in mining and quarrying by 9.7%, and in supplies of electricity, gas, steam and air-conditioning by 6.9%.

According to Korsnak, European sentiment indicators continued to deteriorate in autumn, but they still indicate a growth in external demand, although slower than in 2017. “This may be reflected in the performance of Slovak industry in the coming months. Moreover, it seems that the tense labour market situation [a lack of labour], which translates into dynamic salary growth, may already be eroding the competitiveness of certain sectors with lower-added value that are more sensitive to labour costs,” he added, the Slovak News Agency reported.

“The fundamentals of industry remain positive in general, so we expect the growth rate of industrial production to accelerate somewhat, and the contribution of a new car plant will be visible next year,” said Slovenska sporitelna analyst Katarina Muchova.