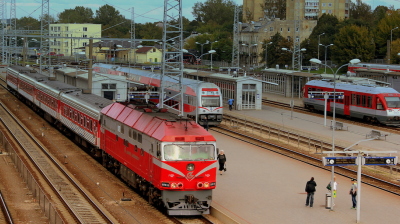 By Linas Jegelevicius in Vilnius August 12, 2021

Beijing took the extreme action in response to the plans by the Baltic country and Taiwan to establish reciprocal diplomatic offices.

Only 15 countries recognise Taiwan as a sovereign nation. Lithuania does not yet have formal diplomatic ties with Taiwan, but it maintains increasingly friendly relations with Taipei. Vilnius has been an increasingly vocal critic of China’s actions towards Taiwan, as well as in Xinjiang and Hong Kong, has withdrawn from China-led multilateral groups and announced vaccine donations to Taiwan.

But despite the tensions that have been building for a while, bilateral trade was on a smooth and upward ride for the last couple of years.

Shen Zhifei, the recalled ambassador extraordinary and plenipotentiary of the People's Republic of China to Lithuania, recently told The Baltic Times that Lithuanian companies exported 300,000+ tonnes of wheat to China in 2019 worth $52.3mn, and again in 2020 worth $75mn. Beef exports in 2020 were 472.1 tonnes worth $2.1mn.

But now Lithuanian Transport Minister Marius Skuodis says he has indications that rising tensions between Vilnius and Beijing might lead to a drop in rail freight volumes with China.

"We have indications on potential impact on rail freight volumes, but I would not want to elaborate. If we look in general, the ties are fairly weak, compared to other countries and those freight volumes within Lithuania," Skuodis said on August 12.

Mantas Bartuska, CEO of Lietuvos Gelezinkeliai (Lithuanian Railways), the country's state-owned railway company, says some trains going to Lithuania from China "might face problems", but they should be minor.

"So far, Chinese transit freight has been going successfully to Kaliningrad towards Germany, and the volumes are even growing. There certain trains going to Lithuania that, we see, might face problems. There are certain obstacles but these are insignificant amounts," Bartuska was quoted by Lithuanian media on August 12.

The firm is also bracing for a potential blow from the loss of Belarusian freights, following the new US sanctions on Belarus.

Bartuska says the state railway group may need around €60mn in state aid to maintain infrastructure when shipments of Belarusian potash fertilisers and other products sent via Lithuania come to a halt.

"It seems that the moment is approaching when shipments will stop, which means that we will lose around €60mn in annual revenue and Lithuania's entire logistics chain will not receive over €100mn in revenue," Bartuska says.

Previously, Lithuanian broke ranks with its neighbours to become the first EU country to exit China’s 17+1 collaboration format for the Central, Eastern and Southeast Europe region.

"There is no such thing as 17+1 anymore, as for practical purposes Lithuania is out," Gabrielius Landsbergis, the country’s foreign minister, explained the decision in May.

The Lithuanian foreign minister called on other EU countries to also abandon the initiative. “From our perspective, it is high time for the EU to move from a dividing 16+1 format to a more uniting and therefore much more efficient 27+1," Landsbergis said. "The EU is strongest when all 27 member states act together along with EU institutions."

Also in May, the European Parliament voted overwhelmingly to freeze the legislative process for ratifying the EU's investment pact with China, unless Beijing lifts sanctions against EU lawmakers that were imposed after the 27 EU countries slapped Xinjiang officials with sanctions over mass internment of the Uyghur minorities.