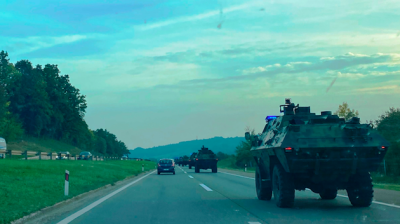 Serbs in northern Kosovo decided on November 5 to abandon the state institutions where they work in protest against the authorities’ insistence on continuing with re-registration of cars with Serbian plates.

Serbs in Kosovo have urged Pristina to withdraw the decision on re-registration of Serbian cars and to allow the establishment of the Union of Serbian Municipalities (ZSO).

The Nato-led peacekeeping mission in Kosovo KFOR is ready to intervene if the stability in the north of Kosovo is jeopardised, Nato’s Deputy Secretary General Mircea Geoana said in a tweet on November 5.

Geoana called on Belgrade and Pristina to "show restraint and prevent escalation”.

Head of the Serbian List, the main party of Serbs in Kosovo, Goran Rakic, said that Serbs from Kosovo’s north decided to leave all political institutions, the parliament, the government, the judiciary, the police, local authorities in four municipalities in the north of Kosovo and all the administrative offices there.

“They are simply asking for the full implementation of the Brussels Agreement, signed almost 10 years ago,” Serbian PM Ana Brnabic said.

Serbia and its former province Kosovo, which unilaterally declared independence in 2008, are engaged in EU-mediated talks since 2011 to normalise their relations. Under the Brussels agreement, Serbs in Kosovo have the right to form an association, but Kosovo’s authorities have so far rejected the idea. Instead, Pristina insists the Belgrade recognise Kosovo as a separate country, which Belgrade is reluctant to accept.

In the meantime, Kosovo’s Serbs held a major protest in Mitrovica North on November 6 to express dissatisfaction with Pristina’s decisions and to formally submit their resignations from the state institutions.

Rakic said that they gathered to send a strong message to Pristina and the international community that there is “enough bullying, harassment and oppression” of the Serbs in Kosovo.

Rakic said the Serbs in Kosovo only want peace and will continue to fight for their rights through peaceful and democratic means.

“I want to publicly return mandates, because you, the people elected us, not Pristina,” said Rakic during the peaceful protest, after Serbs in Kosovo's institutions officially submitted their resignations in the morning.

Serbian Deputy PM and Foreign Minister Ivica Dacic defended the decision of Serbs from Kosovo to leave Kosovan institutions, saying they are only fighting for their interests and for the implementation of the Brussels Agreement.

According to him, the Serbs did not say that they would leave those institutions permanently, only until the ZSO is established.

Last week, Kosovo’s PM Albin Kurti said that the authorities will not postpone the implementation of the decision on re-registration of cars with Serbian number plates for one year as requested by the US.

The Kosovan authorities started issuing new car number plates for local Serbs on September 1, replacing the KS with the RKS code as part of reciprocity measures which sparked anger on the Serbian side. US and EU officials repeatedly asked Kosovo to postpone the deadline in order to avoid tensions in northern Kosovo.

Amid the tense situation, the Serbian army shot down a drone moving from the direction of Kopaonik to Raska, near the border with Kosovo on November 2.

Serbian Defence Minister Milos Vucevic said earlier that President Aleksandar Vucic had ordered any aircraft that are spotted to be eliminated or taken under the control of the Serbian army.

Serbs in Kosovo are reportedly afraid to re-register their cars as since September 1, when the implementation of the decision started, several cars owned by Serbs who decided to get Kosovo RKS plates were set on fire.

US ambassador to Kosovo Jeff Hovenier urged Kosovo on November 2 to extend the deadline for licence plates.

“We reiterate our request for a full extension of the implementation period so that RKS plates can be installed over the course of 12 months while affirming that Kosovo has the right to implement this change,” Hovenier tweeted.