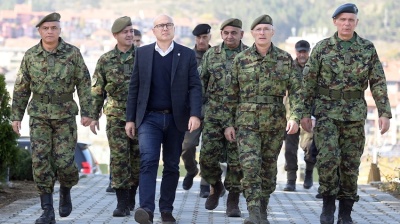 The Serbian army shot down a drone moving from the direction of Kopaonik to Raska, near the border with Kosovo, the defence ministry announced on November 2.

The information came after Serbian officials said that unmarked drones had been spotted several times on the territory of Serbia entering from the direction of Kosovo.

The drone was shot down using an electronic contrameasure system, in the immediate vicinity of the Raska garrison’s military facilities.

Serbian Defence Minister Milos Vucevic said earlier that President Aleksandar Vucic had ordered any aircraft that are spotted to be eliminated or taken under the control of the Serbian army.

"The Serbian army will continue, in accordance with the order, to shoot down all unmanned aerial vehicles found in the no-fly zone and in the vicinity of military facilities," the ministry said.

The drone sightings coincide with the expiry of the deadline for re-registering Serbian cars in Kosovo, an issue which has worsened the relationship between Serbia and Kosovo in the last few months. A day earlier, Vucevic said that Vucic had ordered the military readiness of the army to be raised in order to avoid possible tensions in northern Kosovo in relation to the latest incidents.

“In the past three days the Serbian army observed certain objects, unmanned aerial vehicles or drones moving along the administrative border with Kosovo with occasional entries into the territory of central Serbia,” Vucevic told broadcaster RTS after the sightings of drones on Serbian territory.

Vucevic underlined that multiple drones were spotted and due to this MIG 29 aircraft, which are used for monitoring Serbian air space, were not patrolling.

However, minister said that the army can respond to these challenges with aircraft machine guns, helicopters, cannons and more advanced weapons.

Vucevic said that the drones came from Kosovo, but he could not say whose drones they were.

Serbian PM Ana Brnabic told RTS that drones flew over the area of Merdare, on the border with Kosovo, and parts of the Raska region in Serbia.

She said that the readiness of the army has been raised due to that incident and concerns about the safety of Serbs in Kosovo.

Vucevic said that security risks exist due to the "irresponsible behaviour" of the authorities in Pristina and the number plates issue.

“This can jeopardise security and Serbia must react,” he added.

However, Kosovo’s Defense Minister Armend Mehaj denied that the drones that were observed the Raska area in Serbia came from the Kosovo territory.

He wrote on Facebook that such claims are "just a pretext for the increase of the number of Serbian troops around the border with Kosovo, as a means of spreading panic" in both countries.

The relationship between Serbia and its former province Kosovo is tense due to Pristina’s decision to impose a new regime for cars belonging to Serbs in Kosovo, which sparked anger in Serb-dominated northern Kosovo. On midnight October 31, the deadline given by Kosovan institutions for the re-registration of vehicles with RKS plates expired and Kosovo police handed out the first warnings to Serbs with KM plates.

Kosovo’s PM Albin Kurti said on October 28 the decision on the replacement of Serbian license plates with the RKS code remains in force, but its full application will start on April 21, 2023.

In the meantime, the Kosovan authorities will send warnings to Serbs in northern Kosovo who did not re-register their vehicles from November 1 to 21, and after that date they could be fined.

The Kosovan authorities started issuing new car number plates for local Serbs on September 1, replacing the KS with the RKS code as part of reciprocity measures which sparked anger on the Serbian side. The US and EU officials repeatedly asked Kosovo to postpone the deadline by ten months in order to avoid tensions in northern Kosovo.

Pristina planned to implement the decision on the license plates on August 1, but at the request of the international community, it postponed the implementation until October 31.

Serbs in Kosovo are afraid to re-register their cars as since September 1, when the implementation of the decision started, several cars owned by Serbs who decided to get Kosovo RKS plates were set on fire.

US ambassador to Kosovo Jeff Hovenier urged Kosovo on November 2 to extend the deadline for licence plates.

“We reiterate our request for a full extension of the implementation period so that RKS plates can be installed over the course of 12 months while affirming that Kosovo has the right to implement this change,” Hovenier said in a tweet.

He added that the US condemns burning or destroying property and any effort to intimidate Serbs who intend to obtain RKS car plates under Kosovan law saying these are cowardly and criminal acts.