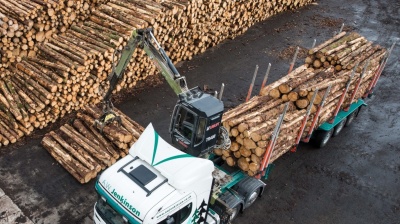 BSW Timber announced its latest investment of €40m in Slovenia, constructing a new sawmill, CHP plant and pellet manufacturing facility which will see the creation of 170 new jobs, on May 22 when it signed a memorandum of understanding (MoU) with Slovenian institutions.

The new sawmill will have the capacity to process an annual input in excess of 300,000m3 of sawlogs, making it the largest mill in Slovenia. However, BSW’s plans face strong opposition from local sawmill operators who fear the arrival of the Scottish company in the northern Slovenian village Gomilsko will bring an end to the businesses of many small companies in this sector.

BSW Timber’s investment will see construction on three sites, including a modern sawmill in Gomilsko with state-of-the-art wood processing technology, the development of pellet production and wood biomass cogeneration at the Sostanj site, and a final site in Letus will focus on the production of value added products, the company announced.

Its products will be available for the Slovenian market, however BSW plans to build on its Latvian marketing model and predominantly export to international markets, such as UK, Southern Europe, North Africa, North America and Asia.

The British embassy in Slovenia tweeted after the deal was announced that "#Slovenia and #Scotland [are] writing a new chapter in the story of Forestry and Sawmilling."

Slovenia is famous as a land of forests, which cover 58% of the country’s territory, according to a 2004 report of from the Forest Service of Slovenia cited by the government. For Tony Hackney, chief executive at BSW Timber, Slovenia is a very attractive country to invest in as the Slovenian government has agreed a 15-year term contract for 120,000 cubic metres of roundwood which will be backed up by supply from a very supportive private sector while working with domestic sawmills.

“Slovenia has some of the best forests in the EU and a largely undeveloped processing sector. We are delighted to be working alongside the Slovenian government to increase the competitiveness of the country’s timber supply chain, in line with their ‘Wood is Beautiful’ strategy,” Hackney said.

BSW Timber is set to begin construction in September 2018, with the aim of starting production in early 2020, the company announced on May 22.

Meanwhile, Slovenian sawmill operators have expressed their concerns over the arrival of Scottish sawmilling group, and claim job losses of up to 1,000 would result from the closure of small local sawmills, far more than the jobs created by BSW, public broadcaster RTV SLO reported on May 22. Many local sawmills already do not operate at full capacity.

"We are against a mega big saw mill, processing 300,000 cubic metres of wood per year," Branko Meh, president of the Chamber of Trade Crafts and Small Business (OZS), in which sawmill operators have their own section, said at a press conference, RTV SLO reported.

According to him, sawmill operators do not oppose the arrival of foreign investors, but they do stand for the limitation of round wood exports.

“The concentration of sawmilling into two or three big centres would destroy the smaller operators, who are dispersed across the country,” RTV SLO quoted Meh.

Besides jobs, Slovenian sawmills are not happy with having foreign ownership within the sector.

"Given the fact that round wood is one of our national raw materials, we are disappointed that foreigners will become number one in the wood processing chain. It is unacceptable that our politicians allow this," said Meh, who is convinced that Slovenia needs a ministry of small businesses, RTV SLO reported.

However, BSW says that according to calculations based on its past experience, every direct job at BSW goes on to create an additional five across a range of related industries, such as harvesting and logistics.

“This would mean that from our 170 new roles, up to 850 additional jobs could be created across Slovenia,” Hackney claimed.