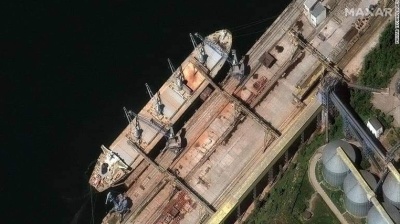 Maxar Technologies recorded two Russian ships in the port of occupied Sevastopol loading grain via a conveyor belt from what appear to be grain silos. Both ships have left the port, with the Aegean Matros Pozynyc heading to Lebanon and the Matros Koshka remaining in the Black Sea, according to MarineTraffic.com. 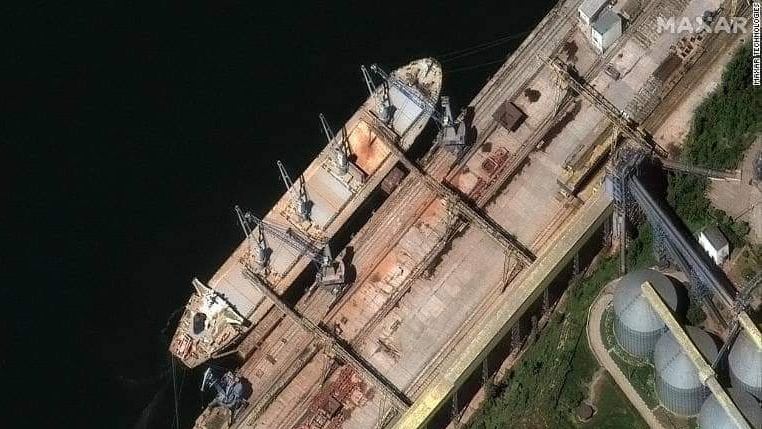 Although Crimea is not an agricultural stronghold, the regions of Kherson and Zaporizhzhia to the north are very fertile. Although the grain is not confirmed to be Ukrainian, Russian troops are occupying, or partially occupying, both regions. Kyiv has accused Russian forces of stealing wheat and other commodities from the occupied territories and trucking them down to Crimea to export.

One such cargo is said to have already been tracked to the port of Latakia, Syria. Ukrainian officials have alleged that the Russian bulker Matros Pozynich loaded a cargo of 27,000 tonnes of stolen grain in Crimea, then transited to Latakia after being rejected from Alexandria and Beirut due to warnings from Kyiv.

In response to the incidents of theft, Ukraine's Ambassador to Ankara Vasyl Bodnar called on the Turkish government to prohibit cargoes of stolen Ukrainian grain from crossing the Bosporus, it was reported last week.

Moscow, meanwhile, continues to refuse requests that it lift its blockade on Ukrainian ports, where millions of tonnes of wheat earmarked for export markets are stuck. If the wheat does not make it to the planned destinations, huge numbers of people around the world could die of starvation, according to aid agencies.

The Kremlin has said it will not discuss lifting the blockade for the shipping of the wheat unless the numerous countries that have imposed swingeing sanctions on Moscow in response to its Ukraine invasion are also put on the agenda for discussion.

Nevertheless, Ukraine managed to export 650,000 tonnes of grain in the first three weeks of May, with help from Romania’s port of Constanta. Although this fell significantly short of the 1.8mn tonnes exported in the whole of May last year, according to data from the Ministry of Agrarian Policy of Ukraine.

With mounting pressure of a global food crisis, Lithuanian Foreign Minister Gabrielius Landsbergis proposed that a naval escort operation – not run by Nato – could protect the grain ships as they headed through the Black Sea and past Russian warships. He suggested that countries that were affected by the potential loss of grain such as Egypt could provide the necessary protection.