Sacked minister vows to “fight for Serbia in the West” 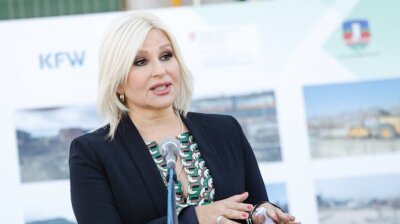 Outgoing Minister of Mining and Energy Zorana Mihajlovic had clashed with colleagues because of her pro-Western views. / mre.gov.rs
By bne IntelliNews October 24, 2022

Serbia’s outgoing Minister of Mining and Energy Zorana Mihajlovic told journalists on October 24 she will “always fight for Serbia in the West” after losing her position in the new cabinet announced the previous day.

Mihajlovic was the leading pro-Western voice within Serbia’s previous government, which brought her into conflict with some of her cabinet colleagues. President Aleksandar Vucic, whose Serbian Progressive Party (SNS) has been in power for the last decade, has insisted on continuing Belgrade’s ‘four pillars’ policy that balances relations with the EU, the US, Russia and China.

Speaking at her at her farewell press conference at the ministry, Mihajlovic said that despite her removal from the ministry she will remain in politics.

"I want to work for my country and people, I will never get out of it. I believe that Serbia has a place in Europe and the EU, and I will always fight for Serbia to be in the West and not in the East in these global divisions,”  Mihajlovic said in comments widely published in the Serbian media.

She declined to comment on her conversation with Vucic on October 23, but said the president would have “one less headache” after she leaves the cabinet “because he won't have that one different tone from the government”.

"As for the story about … the EU, the president knows very well where Serbia should go and what decisions we should make, and I have no doubts about that at all," she added.

Mihajlovic will be replaced as minister of energy and mining by Dubravka Negre. However, the new government, announced more than six months after the April 3 general and presidential elections, is only expected to remain in office until 2024, as announced by Vucic.

Just days before she was replaced, Mihajlovic argued that Serbia should consider imposing sanctions on Russia.

The Serbian government has refused since February to join Western sanctions on Russia, despite coming under pressure to fall into line with EU sanctions policy as a candidate country. While Belgrade has also condemned the invasion of Ukraine and says it will remain neutral, the country’s standing among EU members has fallen, raising concerns that its accession prospects will be permanently damaged.

"In a situation when civilians, children, women and the elderly are being killed on the territory of Ukraine, I think it is time to think about the next phase and to consider introducing sanctions, because if the whole of Europe is showing solidarity, then we should be a part of Europe in that sense as well,” said Mihajlovic, according to a statement published on the ministry’s website on October 18.

“[W]hat the Russian leadership is doing is against European values, and we are in Europe. I repeat, it is not directed against the Russian people, we all have friends there, but I do not agree with the policy of the president of Russia, who is leading a war of conquest,” she told journalists during a visit to a heating plant in Novi Pazar.

Mihajlovic previously clashed with fellow minister Aleksandar Vulin — who has also lost his job as interior minister in the new government — after she accused the Russian foreign minister of “abusing” Serbia’s decision not to impose sanctions on Russia by falsely claiming Serbia supports Russia's invasion of Ukraine.

“Instead of respecting our decision not to impose sanctions, despite the pressures we are facing, [Russian Foreign Minister Sergei] Lavrov is abusing that fact by presenting it as our support for the Russian side in the conflict," Mihajlovic said at the time.

She later publicly called for a strategic partnership agreement between Serbia and US, to strengthen economic and political ties between the two countries.

Vucic revealed the names of ministers in the new government led by Ana Brnabic on October 23, almost a month after Brnabic was nominated as PM-designate. However, Brnabic’s mandate, as Vucic said earlier, will be shorter as there will be government changes in 2024.

Vucic said that the new government is being formed in difficult times, due to the war in Ukraine and the global crisis. He underlined that Serbia's new government should be unified as the country is facing big challenges at the moment, as he singled out the issue of Kosovo.

The government will have 25 ministries, four more than the previous one. Among the key nominations are Socialist Party of Serbia (SPS) leader Ivica Dacic as foreign minister, Sinisa Mali as finance minister and Milos Vucevic as defence minister.