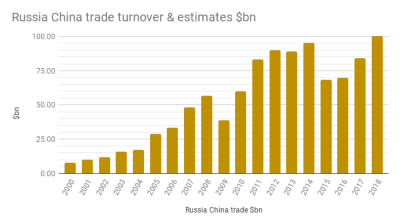 The trade turnover between China and Russia exceeded the targeted $100bn for the year by mid-December 2018, a new record high in trade terms and on the way to the next target of $200bn by 2020, the Chinese Ministry of Commerce announced on January 10.

Sino-Russian trade is growing faster than China’s trade with its other partners as part of Russia’s “pivot to the east.” Both countries are at increasing loggerheads with the west and Russia in particular is looking for new trade partners in the face of looming new “crushing” sanctions that the US is expected to impose in the first quarter of this year. The US has been attempting to isolate Russia, which has successful reorientated its trade away from the west and towards its partners in the BRIC countries.

For its part, China has willingly improved its trade ties with Russia which is a key partners in its Belt and Road Initiative (BRI) infrastructure project, an important part of which is expanding the trade corridor between Asia and Europe through Central Asia and the former Soviet Union region.

The two countries set a target to hit $100bn of trade turnover a few years ago, but that was stymied by the “silent crisis” years of 2014-2016 that hurt both their economies and saw the growth in trade stall.

However, as trade picked up again in 2018 Russian President Vladimir Putin and China’s President Xi Jinping set a new goal of $200bn by 2020 and at the current rate of expansion this looks entirely achievable. Following the collapse of the Soviet Union in 1991 the mutual trade turnover was a bit less than $5bn.

The bilateral trade structure also improved in 2018. Trade in mechanical and electrical products, high-tech products and agricultural produce rose 15%, 29% and 31% respectively in the first 11 months of 2018.

China is willing to work with Russia to lift bilateral economic and trade ties to a new phase on a larger scale with deeper dimension and higher levels, as 2019 marks the 70th anniversary of the establishment of diplomatic relations between the two countries, Gao said.