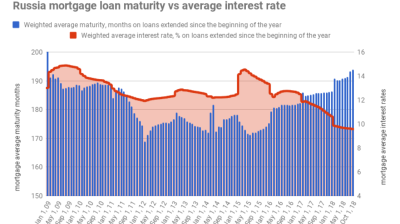 Moscow’s property market is showing signs of life as Russians pile into mortgages ahead of expectations of rising interest rates. Russians have already taken out over RUB2 trillion ($30.5bn) worth of mortgages in the first nine months of this year – more than all the mortgages taken out in 2017 – as mortgage rates defied the central bank rate hikes and fell to an all time low in September.

Real estate is one of the three big drivers of economic growth, but the sector has been flat on its back for most of the last three years thanks to high, albeit falling, interest rates and stagnant growth of personal incomes.

What has changed is the Central Bank of Russia (CBR) easing cycle came to an end in September, when the central bank prophylactically increased rates by 25bp to 7.5% on fears of new “crushing” sanctions that may be imposed by the US government in November.

But despite the lacklustre growth in incomes, optimism about the future has increased and the Russian consumer has started buying big ticket items again. The CBR noted in September that the savings rate has fallen to its lowest level in 15 years. In the first half of 2018, Russians used 5.9% of their income for savings, however, the central bank believes this is indicative of a change in mentality; the Russian consumer has become more free-spending and the retail deposits to loans ratio has actually increased over the circa 170% it was at in 2017.

The spending has translated into more construction. VTB Capital (VTBC) said in a note that the area under construction in Moscow grew 9% y/y to 131mn sqm in the third quarter, after three flattish quarters.

Interest rates are up but mortgage rates have fallen to their lowest ever this year; mortgages lost 45bp YTD to a historical low of 9.41% in September, according to the CBR. That led to RUB2.07 trillion worth of new mortgages, more than in all of 2017. Mortgage deals in Moscow were up by 35% y/y and 32% y/y in the third quarter of 2018 and 9M18, respectively, according to the CBR.

Since the central bank cracked down on consumer lending, previously the most profitable banking business, in 2014, banks have turned to mortgage lending as the next best business. The rising competition has been driving commercial mortgage rates down, but this trend may be coming to an end now. Russia’s biggest mortgage lender, the state-owned retail banking giant Sberbank increased its mortgage rate in September along with a bevy of other leading commercial banks.

Prices on the primary housing market have also started to grow again after two years of no change: primary prices increased 9-12% y/y in Moscow and St Petersburg in the third quarter of 2018, while the secondary market remained generally flat. The mortgage rates are expected to continue to rise from here and the weighted average could top 10% by the end of this year according to experts. Much depends on how Russia’s geopolitical sanctions showdown with the US plays out.

One of the constraints on mortgage loans is that they are largely funded from banks’ retail deposits. However, despite the lower savings rate the overall volume of retail deposits has been growing very strongly over the last two years, rising from RUB19.3 trillion in January 2015 to RUB27.1 trillion now.

As of October 1, the portfolio of mortgage loans issued in total was RUB6.24 trillion worth of mortgages. Overdue mortgages in arrears by more than 90 days decreased in September by 0.05 pp to 1.89% of the total portfolio, according to Dom.rf. In the first nine months of 2018, 55% of deals for new buildings and 46% on the secondary housing market were concluded with a mortgage.

Serbia's population continues to decline
13 hours ago
June PMI shows Turkish manufacturing sinking further into contraction territory
1 day ago
Russia’s manufacturing PMI in the black in June as the sanction shock starts to wear off
1 day ago
Russian economy stable in May, but demand and income contraction deep
2 days ago
CEE Economic Sentiment Indicators fall on polycrisis woes
3 days ago