Russian troops could be gone within week from Kazakhstan, says Tokayev’s spokesman 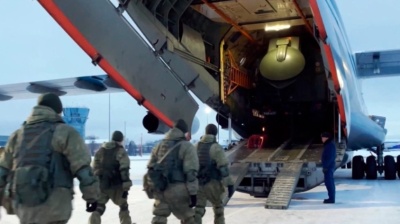 Advanced units of Russian paratroopers flew to Kazakhstan on January 6 as part of the "peacekeeping forces" deployed by the Moscow-led CSTO. / Russian Defence Ministry Press Service.
By bne IntelIiNews January 10, 2022

Russian troops invited into Kazakhstan to help stabilise the country following unrest on the streets could be gone within a week or less, according to a statement issued by the spokesman of Kazakh President Kassym-Jomart Tokayev on January 10.

Also referring to smaller numbers of troops sent by Belarus, Tajikistan, Kyrgyzstan and Armenia—like Russia and Kazakhstan, members of the Collective Security Treaty Organization (CSTO)—Tokayev’s representative said he did not think the soldiers would be in Kazakhstan for long.

January 10 also saw Russian news outlets and Kazakh state media report that 164 people were killed in last week’s clashes between protesters and security forces. They cited a health ministry social media post. But health and police authorities later did not confirm the figure and the post was later deleted, Reuters reported. The police did, however, state that so far 6,044 people had been arrested in connection with the unrest.

Russian paratrooper commander Andrey Serdyukov was quoted by Reuters as saying that the CSTO force had finished deploying to Kazakhstan and would remain there until the situation stabilised completely. The troops were guarding important military, state and socially-important sites in the city of Almaty and nearby areas, he added.

US Secretary of State Antony Blinken in an ABC-TV interview on January 9 denounced the shoot-to-kill order issued by Tokayev to Kazakh forces cracking down on the unrest and said Washington was seeking clarification from Kazakhstan on why the Central Asian nation needed to call in a Russian-led security force to address domestic unrest. Tokayev has claimed thousands involved in the unrest were linked to foreign, financially motivated plotters and that many were “terrorists” and emerged from sleeper cells, but he has not made his case with any evidence.

"We have real questions about why they felt compelled to call this organization that Russia dominates," Blinken said. "We're asking for clarification on that." And he added: "The shoot-to-kill order, to the extent it exists, is wrong and should be rescinded."

• Tokayev stepped up his purge of the country’s security service. Having fired intelligence chief Karim Masimov—a close ally of Tokayev’s predecessor Nursultan Nazarbayev, who ruled Kazakhstan from 1990 to 2019—on January 8, he, on January 9 dismissed two of Masimov’s deputies on the National Security Committee, Marat Osipov and Daulet Ergozhin. Masimov is under investigation for high treason but no reasons were given for the latest dismissals.

• Former Kazakh prime minister Akezhan Kazhegeldin said Tokayev must move fast to consolidate his grip on power after breaking with his powerful predecessor Nazarbayev. He added that the "embittered" Nazarbayev faction would attempt to remobilise if given the chance.

• Supermarket chain Magnum said 15 of its 69 stores in Almaty were looted during the unrest.

• Some analysts have suggested that the driving force behind violent attacks and looting were out-of-town young people, known as “mambets,” who may have been brought in from poor rural areas into cities and incentivised to hijack the protests.

• In Almaty, city inhabitants unable to use digital payment methods because of the internet blackout were filmed joining long queues for bread and other basic foodstuffs as well as fuel.