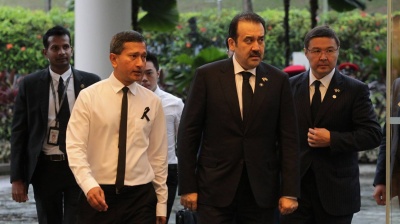 The detention of the former head of Kazakhstan’s security services chief on suspicion of high treason, announced on January 8, has sparked increased speculation that President Kassym-Jomart Tokayev is struggling to quash vicious palace infighting that could derail his attempts to take firm control of the crisis-stricken country.

Karim Masimov—who became known as the “grey cardinal” of the regime of Nursultan Nazarbayev, a political goliath who ruled Kazakhstan for 29 years until he was succeeded by handpicked successor and protege Tokayev in early 2019—was detained just three days after he was fired by Tokayev from his post as head of the National Security Committee, or KNB.

Adding to the intrigue, January 8 brought a dismissal from Nazarbayev’s press secretary of heavy speculation that the 81-year-old ex-leader had fled the Central Asian nation amid its unprecedented unrest. Nazarbayev “calls on everyone to rally around the president of Kazakhstan to overcome current challenges and ensure the integrity of the country,” Aidos Ukibay said on Twitter. Using Nazarbayev’s state-bestowed honorific, “Elbasy”, or “Leader of the Nation”, Aidos also stated that “Elbasy is in the capital of Kazakhstan, Nur-Sultan”. Nazarbayev, he added, had been “holding a number of meetings and is in direct contact with President Kassym-Jomart Tokayev” and “held several conversations with heads of state friendly to Kazakhstan”. 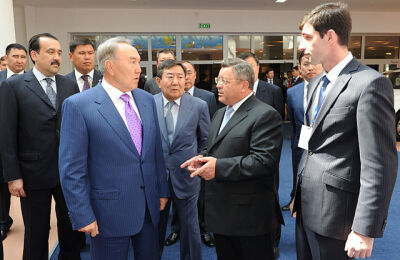 Masimov became known as the "grey cardinal" of Nazarbayev, whom he is seen standing behind in this photograph from 2011 (Image: Irina Arbat, CC-BY-SA 3.0).

Such statements from Aidos jar with the hypothesis that the Nazarbayev clan and elite networks are fighting a rearguard action to prevent Tokayev from using the country’s turmoil to put his own loyalists in charge of the country’s public administration and assets. Tokayev dismissed Nazarbayev from his position of head of the national security council on the same day that he fired the former president’s close ally and long-time political heavyweight Masimov and personally took over the running of the security apparatus. Whether or not Nazarbayev willingly gave up the national security post and the state of relations between Tokayev’s people and the Nazarbayev clan are matters that remain far from clear.

Eurasianet, on January 8 reporting that the charges of treason against Masimov point to the possibility that he was involved in a bid to topple Tokayev, observed that Yermukhamet Yertysbayev—a one-time adviser to Nazarbayev, nicknamed “the president’s nightingale” as he became known for expressing thoughts Nazarbayev wished to put in the public domain with plausible deniability—declared on state television that he had received information that Kazakhstan had been targeted by an “armed rebellion” that amounted to an “attempted coup d’etat”.

Offering evidence for his theory, Yertysbayev told Khabar TV that his information was that an order was given to remove the security cordon around Almaty airport just 40 minutes before protesters stormed and occupied it on January 5. Such an order could likely only have come from the very top.

Rumours that Tokayev fears he does not have the loyalty of the armed forces and law enforcement also remain unresolved. The suggestion is that the president was so quick in calling for Russia and other regional allies to send troops to help him crush the unrest because he feared the military and police might turn on him should the protests intensify much further.

The assistance of thousands of Russian troops, and smaller numbers of Belarusian, Kyrgyz, Tajik and Armenian troops was secured via an appeal to the Collective Security Treaty Organization, or CSTO. To qualify for such CSTO assistance, Tokayev had to trigger the security bloc’s Article 4 by declaring that the popular unrest was incited by violent and armed mobs working with “terrorist groups trained outside the country”. However, Tokayev, who has issued a shoot-to-kill order to soldiers going after those identified as involved in violent unrest, has not presented any evidence that the demonstrations have foreign or “terrorist” origins.

One person abroad who has confessed to contacting protesters on the streets of Kazakhstan to give instructions is self-exiled France-based Kazakh Mukhtar Ablyazov, who leads the two-decade-old Democratic Choice of Kazakhstan (QDT) party, banned in his homeland. Ablyazov is a hugely controversial figure. A former Kazakh energy minister, he headed one of Kazakhstan’s largest banks, BTA Bank, from 2005 to 2009, and has refugee status in France. However, he is a fugitive whom Kazakhstan has tried and sentenced to life imprisonment in absentia for the murder of a former banking colleague and the embezzlement of billions of dollars from BTA. Ablyazov—who in 2016 faced an extradition request from Russia that was blocked by France’s highest administrative authority as politically motivated—has suggested to news agencies he might return to Kazakhstan to lead the “popular uprising”.

US Secretary of State Antony Blinken warned on January 7 that Kazakhstan was pursuing a dangerous strategy by inviting in the Russian armed forces, saying the country would find it difficult to lower Russian influence in the wake of the move. “One lesson in recent history is that once Russians are in your house, it’s sometimes very difficult to get them to leave,” Blinken said.

In response, Russia's Foreign Ministry described Blinken's comments as a "boorish attempt" at humour and defended the deployment of CSTO troops in a Facebook post as a "totally legitimate response".

Tokayev told Russian President Vladimir Putin in a “lengthy” phone call that the situation in Kazakhstan was stabilising, the Kremlin said on January 8. “At the same time, hotbeds of terrorist attacks persist. Therefore, the fight against terrorism will continue with full determination,” Tokayev’s office cited him as saying.

The protests erupted in the western region of Mangystau on January 2 over the doubling in the price of subsidised liquefied petroleum gas (LPG), used as a car fuel by many Kazakhs, before spreading and evolving into anti-government demonstrations.

Authorities say security forces killed 26 demonstrators in the unrest across the week, while 18 law enforcement officers died. More than 4,400 people have been arrested, the interior ministry said on January 8.

Public buildings across Kazakhstan were ransacked and torched in what was the worst violence seen by the former Soviet republic since it secured independence 30 years ago. Commercial capital and largest Kazakh city Almaty, where around two million people live, was worst hit. Some businesses and petrol stations began reopening in the city on January 8, local media reported.

Information flows from the country have been disrupted by the imposition of internet blackouts by the Tokayev administration.

Russia denies defaulting on $100mn bond coupon payment
4 hours ago
A maze of smuggler tunnels: the Kyrgyzstan-Uzbekistan border
5 hours ago
Ukraine's Zelenskiy calls on the US to recognise Russia as a state sponsor of terrorism
5 hours ago
Amnesty International issues damning report on Lithuania’s migration centres
5 hours ago
At least a dozen killed in shopping mall bombing as Zelenskiy urges G7 leaders to impose more sanctions
6 hours ago