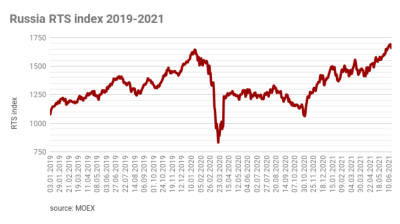 After 36 weeks of straight inflows, a pre-Geneva summit rally came to an end on June 17 as investors took profits. The RTS index has gained some 22% YTD, with banking stocks up more than 50%.
By bne IntelliNews June 18, 2021

A pre-Geneva summit rally saw a record 36 weeks straight of inflows that came to an end on June 17.

Russia-dedicated funds reported net outflows of c$20mn in the week ending June 17 as investors took profits after a strong rally.

Russia’s equity market rallies are very seasonal. Traditionally the market rallies in the spring, gaining some 20%, but then goes quiet over the summer months until the autumn rally starts again in around September in the so-called “Santa Rally”

The dividend season is also underway, with many Russian companies recording record payouts that will run through to August, after which there is also usually a lull before the cycle repeats. As Russian companies are currently earning their strongest profits in five years and most of those profits will be paid out next summer, analysts are speculating that the Russian market will rally again in a second cycle beginning in the autumn and running through to next spring based on this year’s strong earnings.

In the meantime, traditional funds continue to weigh as two active Russia funds managed by Pictet and BNP Paribas reported combined outflows of $40mn. Net of those two funds that have shown particular volatility in fund flows data recently, the number would read as a comfortable net inflow.

GEM equity funds posted their first net outflow since September 2020, of $177mn. Thus the longest streak of inflows into GEM equity funds in history that lasted 36 consecutive weeks and resulted in a combined money intake of $70bn has officially ended.

The Russian market gained 19% YTD in the rally as of June 18, with the banking sector stocks up over 50% in the first five months of the year, although those pulled back by 3pp in the last week as investors took some profits.

Likewise, oil and gas stocks have rallied by 24% this year as of June 18 and gained another 1pp in the last week as oil prices continued to rise to top $73 by the end of this week. Metals and mining stocks were up 23% as of the end of last week on the back of a commodity price boom, but the sector fell back by 5pp in the last week, as this was the sector where investors took the most profits, and it had returned 16% YTD as of June 18.