Russian retail investors are finally investing in stocks as they look for better returns following the steady fall of interest rates at banks in recent years. But the CBR is worried that risks for the financial sector are rising as a result.

With inflation in double digits for much of the time following the collapse of the Soviet Union in 1991 Russians have always been on the hunt for ways to protect the value of their savings. The default option has been to keep their savings in bank deposits that pay high interest rates.

However, following a long run of sustained interest rate cuts by the Central Bank of Russia (CBR) to the point where the overnight prime rate is now almost “normal” – the CBR cut rates to 4.25% at its last meeting in October – bank deposits no long pay an attractive return for most Russians, who have begun to cast about for other investments.

Retail investments into stocks have been accelerating every month this year, reports the CBR, as cited by The Bell. The third quarter of this year set a new record new number of brokerage companies’ clients, up by more than a quarter, or 1.6mn new clients, to a total of 7.6mn compared to the quarter before. Over the year the number of new clients with brokerage firms has already more than doubled. 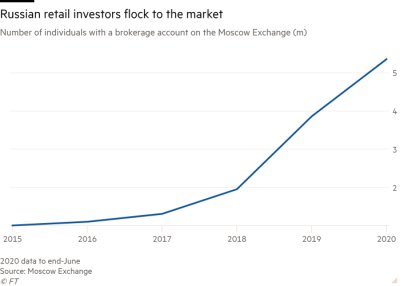 The number of individual investment accounts (IIA) for the year from September 2019 to September 2020 increased two and a half times and reached 2.9mn, and 525,000 of them were opened in the third quarter, reports the CBR.

In October 2020, the Moscow Exchange recorded new historical records in the stock market:

MOEX has also reported record numbers of new clients this year, with adding 736,000 year to date as of October as well as record volumes of transactions, with more than 1.2mn customers making at least one transaction with shares.

The exchange is trying to keep up with demand from these retail investors and in August launched the possibility to buy foreign listed companies via the MOEX exchange, which has been possible since Russia was hooked up to international settlements and payment system Clearstream in 2012. By the beginning of November the daily turnover in trading foreign-listed stocks was up to RUB1.5bn ($20mn). Private investors now account for 43% of the volume of all trading on the stock market, up from 34% in 2019, and 45.8% of trading in foreign shares. 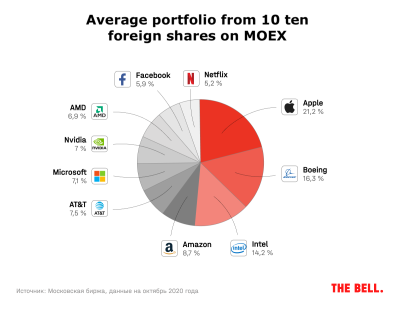 The authorities have long tried to encourage the average Russian to invest in order to create a new source of capital, but each attempt in the past has been met with disaster.

In 1996 then-president Boris Yeltsin launched the so-called PIFs (mutual investment funds) and several international companies like Franklin Templeton moved in hoping to reap profits from an investment bonanza; except within 18 months the market crashed in the 1998 crisis.

Another attempt was made to rope retail investors into the stock market with the IPO of VTB Bank, dubbed “the People’s IPO”, in May 2007. The bank raised over $8bn in an offer priced at 13.6 kopecks ($0.005), which over 100,000 retail investors bought; except again within 18 months the markets crashed again, leaving the retail investors holding shares worth half their purchase value. Today the shares are worth 38 kopecks each, which, following the devaluation in 2014 means they are still worth exactly as much as they were worth in the IPO of $0.005 at current exchange rates.

Banks deposits fall out of fashion

The rapid growth in retail investments into stocks, as well as real estate, is being driven by the falling returns from depositing money with banks.

The CBR has cut its prime overnight rate to its lowest level in modern history, which has led to a mass exodus of bank depositors, reports the CBR, to the point where last week the central bank warned that these outflows carry risks for the financial system.

The falling prime rate has led to commercial banks cutting their deposit rates in parallel. At the most recent peak, the top ten commercial banks were offering a deposit rate of 7.72% in March 2019, but that had dropped to 5.92% by the start of 2020 and fell again to the current 4.53% as of October. The current return from bank deposits only just covers inflation, which is expect to end this year at 4.2%-4.3%.

The rates on foreign currency deposits have decreased even further and are now close to zero. That has led to an exodus of those deposits, too, with RUB635bn ($8.4bn) of outflows this year.

The volume of ruble deposits is still growing and increased by RUB1.1 trillion ($14.5bn) in the first nine months of this year, but ordinary Russians are more and more energetically looking for alternative investments, the CBR says.

The bond market has been another beneficiary of the change. Since the beginning of 2019, investments by the Russian population in bonds have increased by RUB958bn ($12.6bn) of which 70% are bonds of Russian issuers, out of which RUB320bn was invested by the population into shares, according to the CBR. This is still significantly less than the amount deposited in ruble deposits over the same period (RUB3.34 trillion), but the order of magnitude has now become the same.

Outside the domestic capital market the other big winner from the retail investors hunt for returns has been the housing market. Housing prices have begun to rise fast on both the primary and second market, fuelled by a generous government subsidy scheme, which was recently extended into 1H21.

The mortgage market took off in 2008 and recently demand has been stoked by the anti-crisis programme of preferential mortgages at 6.5%, and the average rental yield on the housing market in September of 5.5% per year, which exceeded the weighted average yield on deposits for up to a year by 2.25 percentage points, the CBR said in its Financial Stability Review. In short, an individual investor can make better money from buying an apartment to rent than they can from putting their cash on deposit in a bank. 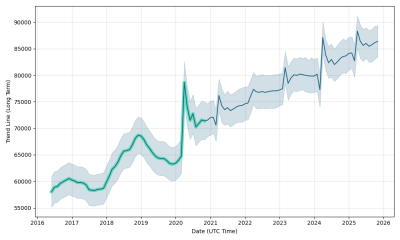 In its more recent Financial Stability Review, the CBR for the first time called the flow of retail funds into the stock market a risk for the Russian financial system. This is a natural stage in the development of the market, writes the Central Bank citing the example of the United States, where securities account for 51% of savings.

The Central Bank lists three associated risks. First, it is the danger of a boom mentality when hype about rising returns causes investors to be incautious when making investment decisions. Secondly, the growing popularity of foreign financial market instruments actually means an outflow of funds from the Russian economy. Thirdly, the growth of citizen participation increases the systemic importance of the stock market: its conjuncture is becoming an important factor in the well-being of people, and their active participation can increase volatility, writes the Central Bank.

The Central Bank calls all these risks limited. Above all, the law on the categorisation of investors, which came into force in July 2020, should help to overcome them. It limits the access of unqualified investors who have not passed special tests to shares that are not included in the calculation base of the largest indices, bonds of issuers with a low rating and other high-risk instruments, as well as investments with leverage.

But the main consequence of the flow of money from Russians to the stock market is its growing importance for the economy and the growing role of decisions of small investors in the dynamics of the market.