Russian population inflation expectations soar to their highest level since 2016 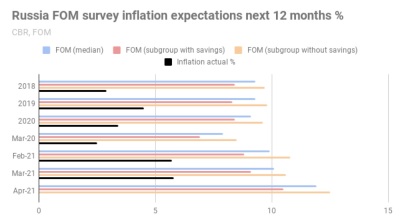 Soaring food prices have unsettled the Russian population that now expect inflation to rise to over 11% this year – the highest level since 2016 – even as inflation pressures start to recede thanks to aggressive tightening by the central bank. / bne IntelliNews
By Ben Aris in Berlin May 4, 2021

“Since the early 2000s, inflation in Russia has never fallen below 6%, except for brief intervals following the major crisis of 2008 and the changes in 2012 to the seasonal indexation of administered prices,” the Bank for International Settlements (BIS) said in a paper. “Persistently high inflation expectations have posed a challenge to the Bank of Russia in setting its 4% inflation targeting course. A further complication was the drop in oil prices and the precipitous weakening of the rouble seen between 2014 and 2015.”

The Central Bank of Russia (CBR) released the results of its monthly survey on inflation expectations conducted by Public Opinion Foundation (FOM) in early April that show consumers' expectations for inflation have “gone through the roof,” according to a comment by Sova Capital analysts in a note on April 27.

In April, inflation expectations rose to their highest level since the end of 2016 and exceeded those following the VAT hike in 2019.

The CBR also extracts information about inflation expectations from inflation-indexed government bonds (OFZ). This information reflects primarily the inflation expectations of institutional investors (both residents and non-residents), especially those of the Russian banks that account for the largest share of government bond trading volume (53% as of October 2015),” BIS said. “Non-residents, non-bank legal entities, households and pension fund/asset management companies with government bonds account for 22%, 10%, 9% and 6% respectively.”

Inflation has surged in the last six months as a result of soaring food prices and the pass-through effect from the devaluation of the ruble caused by an oil price shock last March. But as CBR expected, inflation has finally started to slow down, with consumer price inflation (CPI) dropping from 5.8% y/y in March to 5.5% y/y in mid-April.

Nevertheless, CBR governor Elvira Nabiullina has aggressively increased rates twice this year, surprising the market both times as she attempts to head off inflationary forces. The CBR hiked rates by a bigger than expected 50bp at its April meeting, bringing the prime rate to 5%.

Analysts were surprised by both hikes, as inflation was not that bad and economic growth needs a boost, but one of Nabiullina’s biggest concerns is that consumer expectations of rising inflation become unanchored and the CBR will lose control. Her tough measures of the last two meetings are partly designed to assure the public the CBR has inflation is under control and the rate will come down.

“Households’ and producers’ expectations do not predict inflation accurately in Russia. They are not yet anchored to the target, as inflation targeting in Russia has a very short history. The population habitually expects inflation to be higher than the actual outcome,” BIS said.

Until these expectations abate analysts say the CBR could continue to hike rates aggressively in the coming meetings. The Kremlin is also doing its part by imposing administrative controls on prices after the cost of pasta and sugar, in particular, soared last year. As these are key items in the average shopping basket they have a disproportional effect on expectations.

“Inflation expectations are quite sensitive to rising prices for certain goods. This time, according to CBR, expectations were primarily influenced by some food items, as well as by gasoline prices. The ruble’s weakening in March and early April also affected respondents’ perceptions,” Sova Capital said.