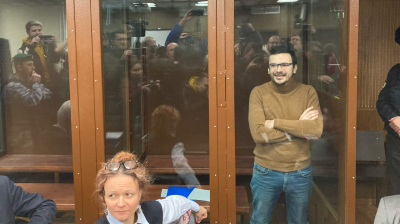 A Moscow court has sentenced Russian opposition politician Ilya Yashin to eight and a half years in prison on charges of spreading “disinformation” about the Russian army.

Yashin is arguably the last prominent opposition leader still in Russia and not in jail or dead. He was belatedly arrested after he hosted an online discussion in April where he discussed the killings of innocent civilians in the Kyiv suburb of Bucha by retreating Russian forces the same month.

In pronouncing the sentence, the judge accused Yashin of spreading “lies” about the Russian forces, despite the fact that the killing of hundreds of civilians has been widely documented and Russia has been accused of war crimes over the incident.

The Kremlin has made using the word “war” to describe its “special military operation” in Ukraine illegal and has been arresting and harassing anyone that opposes the official propaganda on the conflict in Ukraine.

Yashin took the sentence in good humour, smiling and joking with his supporters in the courtroom.

After serving his prison sentence, Yashin will be prohibited from using the internet for an additional four years. Russia’s state prosecutor requested a nine-year prison sentence, Meduza reports.

According to the prosecution, Yashin “knowingly spread false information” for “reasons of political hatred” despite “knowing” that Russia is taking measures to “maintain peace and security” in Ukraine. He was arrested in July.

Yashin pleaded not guilty to the charges.

“So, the court has sentenced me to eight years and six months in a colony. It shows that those who issued this sentence are too optimistic about Putin’s prospects. Way too optimistic, in my opinion,” Yashin wrote in his channel, as reported by Meduza.

“But we have no reason for sadness – because, friends, we have won this process. It was conceived as a show trial over an “enemy of the people” (embodied by me), but instead it turned into an anti-war megaphone. We spoke the truth about war crimes, and called for an end to bloodshed. In response, all we heard was a mash-up of Cold War-era slogans recited by the stammering prosecutor… So, all I have left to say today is what I said on the day of my arrest: I am not afraid – and I say to you, too: don’t be afraid. Change is not far away, and soon we’ll have to do a lot of work to restore justice and humanism in our country.”

Yashin is a leading figure in the opposition movement and in the 2018 Duma elections tried to organise a coalition of opposition parties to present a united front against the ruling United Russia that dominates the Duma. However, egos and infighting stripped the union of its credibility and Parnas polled less than 1% in that election.