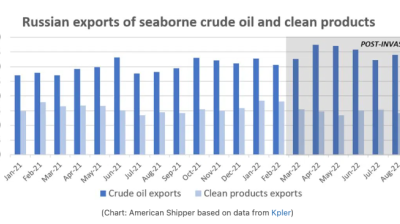 Exports of Russian oil are still booming and while the EU has reduced its imports of crude from Russia it remains a major customer, according to the latest data from the commodity analytics firm Kpler.

While Russian exports of products to all destinations have moderately decreased since the war began, the EU has actually increased its products imports from Russia since March. Over the past seven months, Russian seaborne products imports accounted for an average of 28% of total EU product imports – double Russia’s share of the EU’s seaborne crude imports during the same period a year earlier.

EU members continue to import a lot of Russian diesel/gasoil and have made no cuts in volume since the war began. One of the side-effects of the EU stepping up imports of US oil is that it has increased European demand for Russian diesel. US crude is lighter and sweeter than Russia’s sour Urals blend, so produces lighter fuels such as petrol, but less diesel, which has to be made up with higher diesel imports from Russia.

Russia’s seaborne crude exports, which account for three quarters of Russia’s exports, averaged 3.4mn barrels per day (bpd) during the seven months since the war began, according to Kpler’s data, a 17% increase on the same period a year earlier.

The EU is less reliant on Russian crude than Russian refined products and particularly diesel. EU countries have imported an average of 1.2mn bpd of seaborne crude during the seven months since the war began. That’s down an average of 320,100 bpd, or 21%, compared to the same period in 2021, according to Kpler.

The average volume of EU crude imports from countries other than Russia was 1.3mn bpd higher in March-September versus the same months the year before.

Europe’s switch from importing short haul Russian crude with much longer haul oil from the Middle East and elsewhere, means that tanker demand, measured in tonne-miles, has soared. EU imports of seaborne clean products from non-Russian sources were up an average of 193,381 bpd in March-September 2022 versus March-September 2021.

The EU’s average crude imports from Russia in September are down 668,926 bpd from February, but could fall off to nothing in December when a mooted oil ban comes into force. However, confusion reigns on what will happen in December, as the G7 finance ministers recently agreed to implement an oil price cap scheme that would allow unlimited imports of oil to the EU but would cap the maximum price Russia could charge for the oil. Few details on how the scheme will be enforced have been released, or at what level the proposed cap will be set at.

Belarus Corruption Watch: How one of Lukashenko’s 'wallets' evades sanctions
13 hours ago
Poland basks in the glory of being Kyiv’s chief ally in Europe
3 days ago
Russia forges ahead with gas ambitions in Uzbekistan, Kazakhstan
4 days ago
Mongolian government accused of rushing through veiled law that dismantles freedom of speech
5 days ago
Russia is preparing for spring mass mobilisation
5 days ago