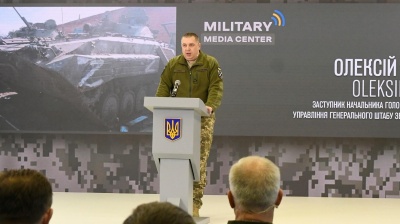 deputy chief of the Main Operational Department of the General Staff of the Armed Forces of Ukraine, Oleksii Hromov, during his press conference on November 3. / https://odessa-journal.com/
By bne IntelliNews November 9, 2022

The recently increased Russo-Belarusian military activity on Belarusian territory might aim to draw Ukrainian forces from the south to the north. However, Russia could form new strike groups to attempt another offensive on Ukraine’s northern border in two-three months. This was stated by deputy chief of the Main Operational Department of the General Staff of the Armed Forces of Ukraine, Oleksii Hromov, during a press conference on November 3.

In late October, the Chief of Intelligence at Ukraine’s Ministry of Defence, Kyrylol Budanov, said in an interview that Russia may be planning a re-invasion from the north after it has lost Kherson.

Ukraine fears of a new Russian invasion from Belarusian territory after Belarusian strongman Alexander Lukashenko’s meeting with Putin between September 26-27. Shortly after this meeting, more Russian troops were quickly transferred to Belarus. Lukashenko and Belarusian security and defence officials have also sharpened their rhetoric against Ukraine, more and more painting Ukraine as a threat and attempting to legitimise the increased military activity in the country.

Russia sent more jets and drones to Belarus during October, likely so as to be able to increase its air assaults on Ukraine in the coming months. Last week, Russia deployed its MiG-31k Foxhound jets, possibly accompanied by hypersonic AS-24 Killjoy ballistic missiles.

While Belarus initially increased its military presence along its border with Ukraine in early October, it withdrew most of the military equipment again between October 15 and October 22. The equipment was returned to the places of permanent deployment.

As one Ukrainian political analyst put it, Russia has “disarmed” Belarus throughout the year. Russian ammunition was mostly sent to Belarus in February, during the preparations for the full-scale invasion of Ukraine. Since April, the flow to Belarus practically stopped and Belarus instead began sending ammunition to Russia. Between March and September, Belarus sent 1940 wagons with a total of 65,089 tonnes of ammunition to Russia.

Besides ammunition, Belarus has also provided Russia with a lot of military hardware. In October alone, Belarus sent at least 94 T-72A tanks and 36-44 Ural trucks along with BMP-2 infantry fighting vehicles and Tor-M2 surface-to-air missile launchers. The “disarmament” of Belarus’ weapon storages rather indicates that Belarus is not preparing to fight any war.

Belarusian security and defence officials have continued to increase their war rhetoric against both Western countries and Ukraine in the last couple of weeks, as well as accusing Ukraine of conducting provocations.

On Tuesday, November 1 last week, the head of Belarus’ security service KGB, Ivan Tertel, claimed that the KGB had knowledge of invasion plans from Poland. The next day, Belarus’ Defence Minister Viktor Khrenin said that Belarus’ recent increase in military activity was only in response to “the actions of our opponents.” He continued by saying that “We are not going to attack anyone.”

Many political analysts agree that Lukashenko won’t put Belarusian troops in Ukraine, something he himself reiterated last week, saying: “Today they are spinning this idea that ‘Lukashenko wants to send his servicemen to Ukraine!' I have already said a thousand times that I have no such plans.”

Such statements by Lukashenko are generally considered to be true. He is content with supplying Russia with ammunition, military hardware and even letting Russia attack Ukraine from Belarusian territory. However, he’s afraid of getting his own troops involved in the war.

This fear is due to several reasons, partly because of the low level of support for Belarusian troops joining the war among ordinary Belarusians, but even among the military. Furthermore, Belarus’ military equipment is in a worse place than Russia’s and the Belarusian army is in great lack of combat experience. On the Ukrainian side, bridges have been blown up, roads have been blocked by concrete blocks, certain areas have been mined, and Ukrainian forces have fortified their positions. The conditions for invading Ukraine from Belarus today are thus worse than they were on February 24.

In the end, Lukashenko also depends on the military for protection in case of renewed mass protests across the country; therefore he needs them close by.

After saving Lukashenko from the Belarusian anti-government protests in 2020, the Kremlin slowly but steadily began tying Belarus closer to itself both politically and economically. During 2021, the Kremlin in fact didn’t actually have to work that hard. Lukashenko did the job for it by alienating Belarus from the West by bringing down Ryanair Flight FR4978 to arrest an opposition journalist and by creating a migrant crisis on the EU border.

Today, Western sanctions have left Belarusian enterprises with nowhere to turn but Russia. The Belarusian government must constantly negotiate trade deals with the Russian private and state sectors to help its economy survive.

Therefore Putin has already achieved a form of victory. He’s managed to pull Belarus away from its former “neutral position” and placed it firmly, politically, economically and militarily under the Kremlin’s control. On October 22, a group of MPs from Ukraine’s parliament, Verkhovna Rada, had their draft resolution registered, which proposes to declare Belarus de-facto occupied by Russia.

Poland’s UN envoy told the UN Security Council last week that “without the democratisation of Belarus there will be no lasting stability in our region.” Poland’s position on this matter is likely shared by other countries on Nato’s eastern flank who’ve also had to deal with the fallout of the Belarusian regime’s political repressions since 2020, and migrant crisis (which is still ongoing) since 2021.

This means that regardless of the outcome in Ukraine, the security situation in Eastern and Central Europe will likely continue to be destabilised if (or rather when) Russia goes ahead with further increasing its military footprint in Belarus.

By securing the Lukashenko regime and by pulling Belarus closer to Russia and deeper into the Russo-Ukraine military conflict, Putin broadens the conflict’s geographical scope. The same goes for Putin bringing in Iranian drones and military service personnel on to the battlefield, which could lead to further sanctions against Iran.

In this way, Putin internationalises the conflict and probably hopes to sharpen the definition of the war as a battle between the liberal and anti-liberal forces of the world. In the long term, this also leads to an escalation of the conflict on to the world stage.