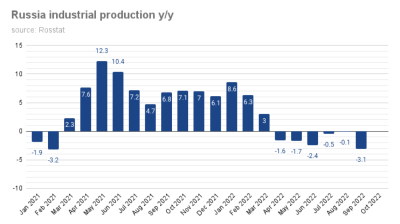 Sanctions are beginning to bite as Russia's industrial production contracts by 3.1% in September. / bne IntelliNews
By bne IntelliNews October 27, 2022

Russian industrial output in September 2022 declined by 3.1% year on year versus a 0.1% y/y decline in August, according to the latest data from RosStat statistics agency. For 9M22 the overall industrial output still hung in positive territory at 0.4% y/y growth, supported by the strong 5.1% y/y growth seen previously in pre-invasion 1Q22.

Previously in July and August the industrial output numbers supported the sentiment that the Russian economy is doing much better than expected under sanctions for the military invasion of Ukraine.

But the 3.1% fall in September came as a negative surprise, noticeably worse than a 1% decline expected by the consensus, BCS Global Markets analysts commented on October 27. The analysts warn that as risks for the economy intensify in 4Q22, the industry could shrink by 2.2% y/y in 2022 overall.

Manufacturing, which fell 4% in September (vs -0.8% y/y in August), was the main contributor to the contraction in the headline industrial output. Previous reports already indicated that the pain from the sanctions and the resilience is very unevenly spread, with commodity exports and mining being the main outperformers.

But even mining in September, after supporting the output for three consecutive months, synchronised with manufacturing and pulled production down in September (-1.8% y/y versus +1% y/y in August), BCS GM analysts noted.

For metals, output contracted by 2.4% y/y in September, but still remained in positive territory with a 0.4% y/y gain for 9M22. Sanctioned steel was under pressure, contracting by almost 9% y/y in both September and 9M22 overall, while still unsanctioned aluminium gained a 26% output boost in the reporting month.

“A number of domestic and external shocks intensifying in 4Q22 is expected to lead to a 2.2% y/y contraction in industrial production for the full year. The only support is expected from ongoing significant budgetary expenses, but given their high concentration on national security (with low multiplier effect), we do not expect a resilient and steady economic and production recovery in the short term,” BCS GM commented.