Russian corporates have a profitable 2019 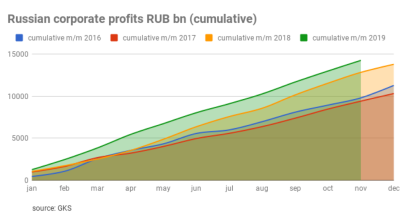 After almost five years of crisis Russia’s corporates are back in profit and had a strong 2019, easily out-earning the year before, according to the most recent Rossat numbers.

Net profits of Russian companies over the first eleven months of last year, the latest data available, were up RUB1.5 trillion to RUB14.3 trillion ($214bn), from the RUB12.8 trillion companies earned the year before, equivalent to an 11.1% gain year-on-year.

As the charts show, cumulative corporate profits for the year were well ahead of the previous years although the rate of increase in the growth of profits halved in 2018-19 vs 2017-18, suggesting that Russia’s economy bounced out of the crisis years in 2017 but is now settling down to steadier, but sustainable growth.

That view is supported by the month-on-month profit chart that shows Russian companies had a very strong first half of 2019, easily out-earning the previous year, but in the second half of 2019 profits were largely on a par with the previous year – slightly ahead in August, but slightly behind in September.

The 11.1% y/y increase in corporate net profits last year also explains the surprise 10.1% y/y nominal wage growth rate in December. Having had a good year, managers shared some of their gains with workers in the form of higher than usual Christmas bonuses, which is traditional in Russia.

This article is from bne IntelliNews Russia monthly country report. Sign up to receive the report to your inbox each month, covering the slow moving macro- and micro-economic trends, the major political news and a round-up of the main sectors and corporate news. The first month is free and you can unsubscribe at any time.

Bulgaria’s central bank revises up 2021 economic growth forecast to 4.1%
1 hour ago
Average gross wage in Slovenia up by a real 3.9% y/y in May
2 days ago
Polish retail sales ease growth to 8.6% y/y in June
2 days ago
Natural disasters caused €80mn of damage to Croatian agriculture in 2021
3 days ago
Poland’s industrial production eases growth in June
3 days ago