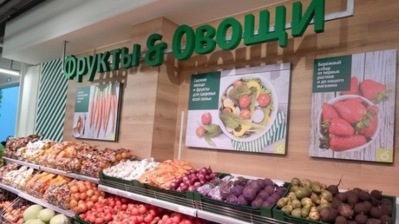 Russians have to pay an extra $50 per year per person as a result of the ban on food imports from the EU
By bne IntelliNews October 29, 2019

Russia’s sanctions on the import of food products from the European Union (EU) is costing Russian consumers RUB445bn ($7bn) a year, or about $50 a year per head, according to a study by economists at RANEPA and CEFIR, Kommersant reported on October 29.

And the cost is mainly borne by consumers that absorb 84% of the increased costs, while food manufacturers carry only 3% of the extra burden, the study found. Food importers carry another 13% of the burden in net losses.

Russia imposed the agri-sanctions on Europe as a tit-for-tat measure after Europe and Amercia slapped punitive sanctions on Russia following its annexation of the Crimea in May 2014.

Since then President Vladimir Putin has said the Russian sanctions on food cost Europe €100bn a year, although it is not clear where he gets this figure from. However, mutual trade between Russia and the EU has fallen by about that amount in the last five years and many EU food exporters have been badly wounded by the Russian sanctions. Previously Russia was a major export market for things like pork and fruit. High end processed food products like Italian cured meats and posh French cheese have almost entirely disappeared from Moscow shop shelves since the ban was introduced.

Russian food manufacturers have scrambled to replace the missing products, but with little success, except for products like tomatoes, pork and poultry, reports Kommersant. In these cases the prices of good initially rose dramatically, however, since last year the volumes being produced domestically have reached a point where the prices have fallen below pre-sanction levels.

The total benefits for consumers from the import substitution of pork, poultry and tomatoes are estimated by the authors of the study at RUB75bn a year, but is nowhere near enough to offset the rise in prices on other goods. Most of the items on the list of sanctioned goods have not been replaced.

Amongst Russia’s friends that have stepped into the breach and increased food exports to Russia, Belarus has been the big winner seeing its exports rise by 78% in the period.