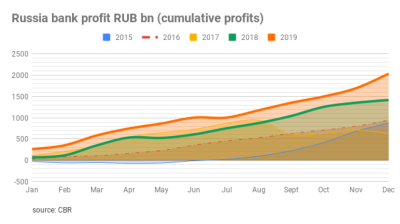 Russia's banks had their best year in the last five years ending with some RUB1.7tn in profits / bne IntelliNews
By Ben Aris in Berlin January 29, 2020

The crisis that Russian banks suffered in 2014-2016 is well and truly over as the sector had its second full year of clear profits in 2019, the Central Bank of Russia (CBR) reported on January 28.

After a near-miss systemic meltdown in the autumn of 2017 when the leading so-called Garden Ring of commercial banks collapsed and had to be bailed out, the sector began to recover in 2018. Last year the banks built on this recovery and saw profits rise smoothly over the year to earn collectively a net profit of RUB1.7tn ($27.2bn) in 2019.

As the chart shows, banks had their best year in the last five years. The crisis is over in the bank sector, which is now on the path to sustainable growth.

However, the bank’s profits had to be recalculated and adjusted for a change in the accounting rules. Russia has adopted the new IFRS 9 international accounting standards, which are supposed to reflect the health of banks and companies better, and which have led to RUB0.4tn of adjustments to profit results. That brought profits down by RUB1.3tn or 11% from the full-year earnings of RUB1.5tn, reports VTB Capital.

Loan growth also slowed for both the retail and corporate borrowers. In the case of retail, the CBR was worried that a consumer credit bubble was forming, as the rate of growth of retail loans – one of bank’s most profitable business lines – expanded by nearly 25% a year in early 2019, while real incomes were stagnant or falling. With this clearly unsustainable trend, the CBR imposed tougher prudential rules on banks making loans to ordinary people and the expansion rate of new consumer loans ended the year at 18.5% y/y, from its peak of 23.8% y/y in April 2019.

As Rosstat reported this week, real incomes have started to rise again in the last quarter of 2019 and the government is expected to feed further rises in income this year with a big state spending programme, the level of indebted of average Russians is expected to reverse and start falling this year, even if borrowing continues to grow, albeit it at a more modest pace.

Anecdotal evidence suggests that retail loans are already more difficult to get as banks are being more cautious about whom they lend to. That is backed up by the fall in retail non-performing loans (NLPs) to 4.3% - a modest level.

“Retail loan growth continues to decline, as the measures taken by the CBR (both the increased risk weight and [central bank] regulation) limit banks’ appetite for risk and balance the positive effect of lower interest rates. We think this trend will continue in 2020, with the CBR discussing more regulatory tightening and now targeting mortgages, housing and car loans. However, the nominal growth is to remain above 10% y/y, in our view,” VTBC said in a note.

Corporate loans are also slowing, but for different reasons. Russian businessmen are suffering from a crisis of confidence and simply not borrowing to grow their business, preferring the status quo and taking out profits as dividends, as bne IntelliNews has written elsewhere.

The book value of corporate loan growth (excluding FX effects) decelerated to 4.3% y/y in December, from 5.1% at the end of 2018, amid lower demand for FX loans, while ruble-denominated loans increased somewhat by 6.9% y/y.

“In the corporate segment, we expect growth to accelerate to slightly above nominal GDP growth. Meanwhile, profitability is set to remain under pressure from lower yields, greater competition for quality customers and IT costs,” VTBC added.

The economic stagnation that Russia has been suffering over the last five years shows up in the falling asset quality of corporate loans, which declined as the share of overdue amounts reached 7.8% compared with 6.3% a year earlier. While this result is still far away from being a real problem for the sector, it is indicative of the tough business environment banks are still facing without the deep structural reforms the economy still needs.

All in all, the outlook for 2020 remains good and banks are expected to improve their position further; however, everything depends on just how effective the new government of Prime Minister Mikhail Mishustin will be in implementing the national projects. 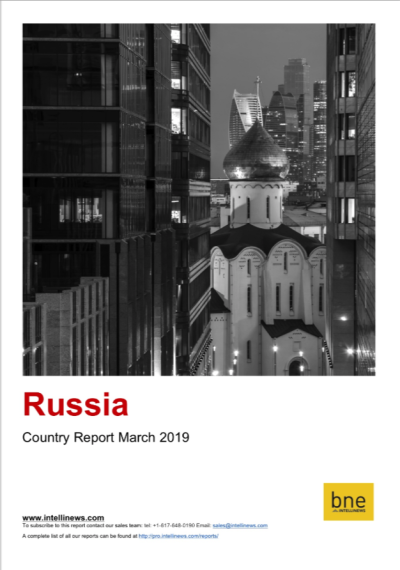