Russia turns its eyes and wealth to the Arctic 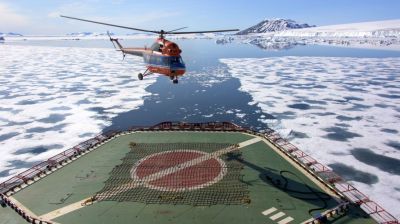 Russia's remote Arctic regions are one of Moscow's key areas of future development. / Photo by Christopher Michel/CC
By Vladimir Kozlov in Moscow March 27, 2017

Plans are hotting up for the development of the coldest reaches of the world, with the Russian government announcing that it will spend RUB209bn (€3.4bn) over the next three years to boost the country’s Arctic regions, with state and commercial companies pledging billions more.

The 4th International Arctic Forum “Arctic: Territory of Dialogue”, which runs in Arkhangelsk on March 29-30 and is due to be attended by President Vladimir Putin, will focus on major issues of the region’s development, such as the creation of a transport infrastructure and the exploration and production of mineral resources.

Among the government’s priorities in the region are exploration of the Arctic continental shelf, where substantial energy reserves still lie untapped, support for indigenous communities, environmental monitoring, and raising of sunken nuclear vessels.

“In a broad sense, exploring the Arctic regions is aimed not only at extracting mineral resources, but also at ensuring full-fledged human activity in extremely cold climate and towns that are the state’s outposts,” Igor Orlov, governor of Arkhangelsk region, tells bne IntelliNews.

To implement that goal, there is a need for a transport and logistics infrastructure. “Work in that direction is already in progress,” Orlov says. “As a result, a coordination centre for sea freight for the entire Northeast Passage was created on the basis of the company Oboronlogistika.”

According to Orlov, projects for construction of a railway linking major industrial regions in Siberia and the Urals with ocean-access ports in Russia’s North West and a deep-water sea port in Arkhangelsk are currently under development, and a Chinese investor is interested in joining.

The Murmansk and Arkhangelsk regions are major logistical hubs, connecting the Northeast Passage with Europe and internal Russian transport arteries, says Sergei Shinkarev, head of the business council at the state commission for Arctic development issues. “The transport opportunities are the drivers of growth for the regions’ economies, despite the strong mineral resources extraction sector,” he says.

According to Shinkarev, major projects aimed at the development of the region include the shipbuilding cluster in Arkhangelsk and new transport solutions in Murmansk. On March 27, Russian independent gas producer Novatek said it will invest more than RUB25bn (€405mn) in a shipyard in Murmansk for its Arctic projects.

Meanwhile, doing business in the Arctic region is challenging, mainly due to the extreme weather conditions in the region. The main challenges, according to experts, are the extremely cold climate and safety issues. “The Arctic is a huge micro-region, which has special safety requirements,” says Shinkarev.

“Collection and processing of data pertaining to the ice situation and climate conditions and threats linked to permafrost and natural anomaly, mapping and monitoring of the situation are the minimal steps that had to be made by all Arctic countries,” he adds.

Meanwhile, the government is expected to play a major role in attracting private investors to the region. “Preferences extended by the government, in addition to economic gains from projects, is a major factor that is set to raise potential private investors’ interest in the Arctic territory,” says Orlov. “It would be right to create special conditions for doing business [in the region] while forming tax, fiscal and social requirements for projects, as the costs of living and working here are substantially higher [than in other Russian regions].”

Still, there have been positive examples of collaboration between the authorities and investors, such as the company MRTS, which builds hydro structures in Arkhangelsk region. One specific example is the Solombal terminal in Arkhangelsk, which was upgraded and is now used for shipping cargo to the Arctic for construction there.

There has also been successful collaboration with such foreign companies as Canada’s John Deere and Germany’s Knauf.

One major issue to be discussed at the forum is oil extraction in Arctic conditions. By now, all of Russia’s Arctic territory that has prospects for oil and gas extraction has been licensed. Licences have been issued for an area of about 1.1mn sq km, and the majority of the licenses have been issued to Rosneft, which owns licences for 28 sites on the Arctic shelf with total resources of 34bn tonnes of oil equivalent.

Rosneft invested around RUB100bn ($1.74bn) in the development of Russia’s Arctic shelf in 2012-2016 and plans a severalfold increase of the figure in the next five years, a company spokesman told TASS on March 20.

But exploration in the Arctic region requires equipment, some of which has never been manufactured here. Western sanctions imposed on Russia since 2014 have cut the supply of some essential foreign-made oil and gas exploration technology, complicating development plans for the far North.

“Throughout the entire Russian history, including the Soviet era, our country has never built oil exploration platforms capable of operation on Arctic shelf,” says Ruslan Tankayev, general director of the company InfoTEK Terminal and a senior expert at the Union of oil and gas industrialists of Russia. “Local companies have either purchased or rented platforms abroad.”

“Over the next few years, Russia is getting its own platforms for oil exploration in the Arctic,” he adds. “For that purpose, two clusters are in operation, one in Murmansk and one near Vladivostok.”

According to Tankayev, international cooperation in Arctic exploration is vital and such countries as Norway, Great Britain, the United States, France, Germany, Italy, China, Japan and South Korea, have already shown interest.

“Russia is not working separately from the international community,” he says. “For instance, Japanese companies have been successfully involved in development of Sakhalin, a region that is next to the Arctic region and has similar conditions.”

Qatar’s sovereign investment fund recently acquired a substantial stake in Rosneft and among its plans is work on Russia’s Arctic shelf in collaboration with local oil companies, he adds.

One potentially lucrative project in the Arctic region is the Olenek bitumen deposit. “In terms of its volume, it is comparable to Samotlor, Russia’s No. 1 and the world’s No. 6 biggest deposit,” says Tankayev. “It’s a huge project in scale and investment.”

New prospects in the Trump era

In particular, US oil and gas corporation ExxonMobil limited its participation in cooperation with Rosneft in the Arctic region due to the sanctions. Overall, the US company scaled down nine out of ten joint projects with Rosneft since 2014, including exploration and potential production in the offshore area in the Arctic, Black Sea, and Western Siberia.

But with Moscow and Washington anticipating more ‘pragmatic’ cooperation under US President Donald Trump, the oil companies are again looking at possibilities when the sanctions are eventually eased or lifted. The appointment of former ExxonMobil CEO Rex Tillerson as Secretary of State is expected to facilitate cooperation in the energy sphere in particular.

On March 17, the current head of ExxonMobil Darren Woods confirmed at a meeting in Moscow his interest in participating in projects in Russia, Energy Minister Alexander Novak said.