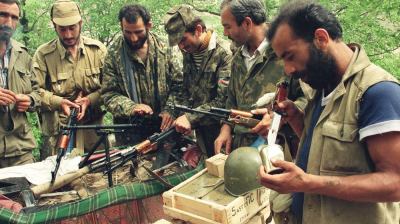 Azerbaijani soldiers seen during the Nagorno-Karabakh War in 1992.
By bne IntelIiNews June 4, 2020

Armenia reportedly has plans to start production of Russian AK-103 Kalashnikov rifles during the first 10 days of July.

The Russian Federal Service for Military-Technical Cooperation said annual production volume was expected to be 50,000 rifles, with components to be supplied from Russia. The service confirmed the information in emailed comments to Reuters on June 4.

The contract was signed on May 15.

Armenia is Russia's strategic partner in the South Caucasus region and hosts a Russian military base, although Moscow serves as an intermediary in attempts to resolve hostilities between Armenia and neighbour Azerbaijan.

Separately,  Public Radio of Armenia reported on June 24 that, alarmed by a US Trump administration military aid programme to Azerbaijan that has “skyrocketed” to more than $120mn over the past three fiscal years, Senator Bob Menendez (Democrat-New Jersey) has formally requested that the US Government Accountability Office (GAO) provide the US Senate Foreign Relations Committee with a detailed report on this assistance programme and its compliance with Section 907 of the Freedom Support Act.

The radio outlet cited a report from the Armenian National Committee of America (ANCA).

Enacted in 1992, Section 907 places statutory restrictions and requirements on US taxpayer funding to Azerbaijan until that government takes “demonstrable steps to cease all blockades and other offensive uses of force against Armenia and Nagorno-Karabakh”, the report stated.

Armenia and Azerbaijani have remained in a standoff over Nagorno-Karabakh—a breakaway territory internationally recognised as part of Azerbaijan but controlled by ethnic Armenians—since fighting a war over the enclave between 1988 and 1994.

Think tank Jamestown observed that "the bilateral defense ties between Ankara and Baku have scaled-up to a new level over the past decade, becoming a genuine military alliance, thanks to the 2010 Agreement on Strategic Partnership and Mutual Support (ASPMS)".

Belarus presidential elections are all over before they start
1 hour ago
Ratings agencies serve warnings to Turkey in lira battle, officials told to stop “muddling through”
1 day ago
Zelenskiy loses more ground in the polls as his Servant of the People approval falls to 26%
2 days ago
Belarusian opposition candidate Tikhanovskaya hijacks government concert after her rally blocked
2 days ago
Russian newspaper Kommersant poll finds Tikhanovskaya narrowly beats Lukashenko in presidential election
3 days ago