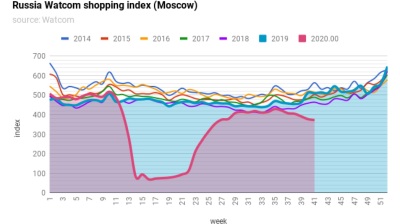 Retail sales have taken a beating this year after Moscow Mayor Sergey Sobyanin put the capital, some 15mn residents, on a strict lockdown in May but sales recovered quickly in the summer after the restrictions were lifted.

The results from October are expected to show an even more dramatic slowdown as consumers start to self-isolate or at least avoid public places to prevent infections.

Sobyanin is trying to avoid another lockdown and said last week that this week would be crucial. Residents of Moscow report that the authorities have cracked down on the existing rules on mask wearing and have been dishing out heavy fines to those ignoring them. Residents over the age of 65 have already been ordered to stay at home.

After falling between May and September the infection rate (R0) took off again in the last week of September and by October 14 had set a new all-time high with 13,754 new cases reported. Russia has had a total of 1.4mn cases to date, out of which 23,491 people have died. A record 286 people have died from the virus in just the last 24 hours.

The Moscow city authorities will launch a new tracking initative staring October 19 where Muscovites will be required to register their mobile phone number before they can enter bars or nightclubs in order to help bring the epidemic under control, Sobyanin announced on October 14.

The resurgence of the virus is bad news for Russia’s economic outlook. Russia has been having a good crisis and the economy has fared a lot better than many analysts had feared. One of the reasons for the better than expected results has been the quick recovery of retail sales that were a shot in the arm for the sick economy.

The International Monetary Fund (IMF) has improved its forecast for contraction of Russia’s gross domestic product (GDP) in 2020 to 4.1% from the previous estimate of 6.6%, the IMF said in the World Economic Outlook report released on October 13.

However, with the second wave of the pandemic now breaking in Russia that consumption boost will likely disappear quickly and the economy slow again.

The big hope is that the Russian Sputnik V vaccine, which is currently in Phase 3 testing, will make a difference. Selected workers, including those in healthcare and journalists, have already been inoculated. A mass inoculation is planned for the start of next year.