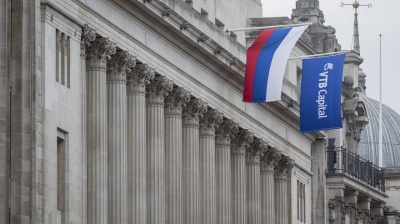 Leading Russian state-owned bank VTB has shut up shop in London, ending a 100-year history of Russian banks in the UK capital that runs back to the establishment of Moscow Narodny Bank that was set up by the Tsars. / bne IntelliNews
By Jason Corcoran in Dublin November 9, 2022

VTB, the Kremlin’s second-largest bank, has brought down the curtains on “the final chapter” in its “100+year history” in the City of London, according to its latest regulatory filing.

The 145-page annual accounts for its UK unit, which were published on November 3, clearly illustrates the extent to which Russian bankers have been ostracised and cast out of London since Russia invaded Ukraine on February 24.

“As the bank enters what is likely to be the final chapter in its 100+year history, I would like to thank all the staff – past and present – for their loyalty and unwavering commitment to the bank,” laments its chairman, Philip Dayer, a loyal servant to VTB for almost a decade.

In a script seemingly vetted by the Kremlin, the filing cites “the events of February 24" and the "continued hostilities between the Russian Federation and Ukraine" as the reason for its departure.

In Russia, media outlets are banned for using the words “war” and “invasion”, while President Vladimir Putin insists on calling the war "a special military operation" as part of a “denazification” and “desatanisation” of Ukraine – accusations that have been lampooned as ludicrous propaganda by the West.

The London operation, which can trace its lineage back to Tsarist times via its Moscow Narodny subsidiary based near Cannon Street since the Revolution in 1917, has been a prestigious calling card for the Kremlin in the UK.

Moscow Narodny was taken over by VTB and rebranded in the noughties. In 2008, the bank opened swanky new offices at 14 Cornhill – the former home of Lloyds Bank that is located next to the Bank of England – and started hiring hundreds of bankers until the headcount exceeded 600.

But Western sanctions, first introduced after Russia’s annexation of Crimea in 2014, turned VTB and its staff into a pariah in the UK capital, with the bank forced to sub-lease much of its flash city lodgings.

A strategic review in 2018 led to VTB setting up a trading capability in Frankfurt and offloading much of its loan portfolio to its Frankfurt and Moscow arms and reducing its market risk across its fixed income and equity business lines.

The final nail in the coffin came in March this year, when VTB was forced to seek administration after its parent group was hit by severe sanctions aimed at isolating Russian entities and oligarchs from the wider global financial system. Those measures include the UK’s imposition of an asset freeze on the bank and its exclusion by the European Union from the SWIFT payments system – a vital component of international financial plumbing.

The London Stock Exchange also suspended the bank’s membership, meaning it could no longer trade on the bourse.

Daniel Bayfield, the QC acting for VTB directors, told the High Court in April that the UK business had been “paralysed even beyond the paralysis” caused by the sanctions.

The bank, which is run by former Soviet diplomat Andrey Kostin, who did a stint at Russia’s London embassy during the Soviet-era, had long cherished its outpost in the city’s glamorous Square Mile, and was clearly not happy to retreat from Londongrad – ground zero for champagne-fuelled deal-making by oligarchs, apparatchiks, Russian financiers and their battalions of lawyers and advisers for almost two decades.

Kostin had got a taste of London in the 1980s as an economic attaché in the Soviet UK Embassy, where he served with his close personal friend Viktor Gerashchenko, the official representative of Gosbank, the central bank of the Soviet Union. Both men are Anglophiles and speak fluent English.

VTB has had the largest international presence of all of the Russian banks. With the blessing of Putin, its investment banking unit VTB Capital began its international expansion a decade ago, opening further outposts in New York, Dubai, Hong Kong, Singapore and Sofia.

In 2012, the lender declared its ambitions to build an investment banking empire to rival those of Deutsche Bank and UBS. By 2013, 40% of VTB Capital’s profits came from its international business until sanctions put a dampener on these activities.

Administration ironically came as VTB claimed its UK unit had finally turned a corner. The bank said it had recorded a post-tax loss last year of $36.2mn, a considerable narrowing against the loss of $212.7mn in 2020.

However, the latest account discloses that the bank’s loan portfolio “is primarily made up of five non-performing facilities with a net carrying value of circa $433mn.” The filings also reveal VTB is trapped in an expensive lease for its office in the heart of the City’s financial district on Bank Junction until February 2028. The group, which has sub-leased three of the floors, say it has the option, as stipulated in the agreement, to first break the lease in August 2024.

On March 7, the bank’s auditors Ernst & Young announced it was terminating its work with Russian state clients so VTB’s directors “took the difficult decision” to issue a financial statement not compliant with International Financial Reporting Standards (IFRS).

Sberbank, Russia’s largest lender, also had a presence in the UK, albeit a much smaller one than VTB’s. Its London operation has also entered administration after the UK froze its assets and the US imposed “full blocking sanctions.” The lender, which is run by Putin’s former Economy Minister German Gref, realised GBP71,000 from selling computers and office furniture, according to an administrator’s progress report published on November 3. “Bespoke art works,” worth an estimated GBP45,000, will be auctioned off later this month by Roseberys Auctioneers in order to pay off Sberbank's creditors.

The bank, which was based at 85 Fleet Street in central London, exited its leasehold in September this year, with the remaining few personnel having to work from home during the wind-down.

Former employees of VTB and Sberbank in London have been struggling to find work due to the perceived stigma of having worked for Russian state entities, which have been supporting Putin’s war in Ukraine.

A former banker at VTB Capital, who spent more than three years working in its London office, said he was forced to abandon his career in the city.

“Nobody is hiring anyone who worked at VTB or Sber and the headhunters wouldn’t return my calls,” the banker told bne IntelliNews, asking for his name to be withheld. “Rightly and wrongly, we are pariahs and outcasts in the city for having worked for a financial institution with a direct line to a raving megalomaniac in the Kremlin.”