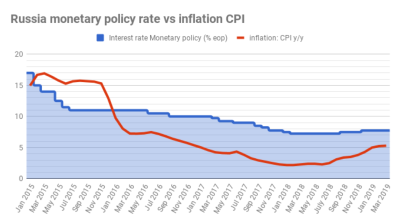 Russian inflation has been unexpectedly mild this year and some analysts speculate the CBR will start cutting rates again soon.
By bne IntelliNews April 23, 2019

Russia’s inflation surged at the end of 2018 thanks to the unexpected weakness of the ruble against the dollar and the increase in the VAT by 2pp to 20% that went into effect in January. But analysts and the Central Bank of Russia (CBR) have been surprised at how mild the inflationary gains were. Economists at VTB Capital (VTBC) are now revising their expectations for this year’s inflation down and say there is room for the central bank to cut rates twice this year as a result.

Inflation broke decisively through the 4% desired rate as this year got underway, rising to 5% in January and has since climbed to 5.2% as of March, the latest data available, but the rise was less than expected.

“According to Rosstat data on weekly inflation, consumer prices in Russia stopped growing at the end of March, and annual inflation began to decline (5.2% y/y – based on the latest weekly inflation data as of the end of the first week of April). This fact did not go unnoticed by the CBR: according to the regulator’s estimate, March inflation (adjusted for seasonality) was only 0.3% – a new low since July 2018. Last week, CBR officials softened their rhetoric and started publicly toying with the possibility of lowering the rate in the medium term,” BSC Global Markets chief economist Vladimir Tikhomirov said in a note. "Indeed, zero consumer price growth in March-April is an extremely unusual trend."

Tikhomirov ascribes the low inflation to depressed consumer demand, the state’s freezing of gasoline prices, and the ruble strengthening amid the devaluation of the Turkish lira that slowed prices for imported fruit and vegetables, among the most important factors.

Some economists worried that inflation would continue to climb as the summer approaches and reach 6% or more, before easing again in the second half of this year.

The CBR was anticipating higher than targeted inflation, partly as a result of new sanctions that were supposed to be imposed by the US government, that were eventually delayed until the first quarter of this year, thanks to the distraction of the mid-term elections in the US last autumn. In order to head off the anticipated currency volatility that would have come with sanctions (and in anticipation of the 2pp VAT rate hike) the CBR unexpectedly ended its easing cycle and hiked rates twice in the last months of 2018, in September and December.

The CBR rates have been on hold since then and remain at a relatively high 7.75%, which is suffocating growth, but with CBR governor Elvira Nabiullina now known as the “world’s most orthodox central banker” it is unlikely she will cut the monetary policy rate until she is certain that inflation is under control. Moreover, the delayed Defending American Security Against Kremlin Aggression Act (DASKAA) sanctions from last autumn are still due to be heard by the US Congress this year and could include some painful clauses such as targeting Russian sovereign debt that will impact the exchange rate and hence inflation.

But sentiment is changing now as inflationary pressure eases faster than expected. While few analysts expect the CBR to cut rates at the next policy meeting at the end of April, more are speculating that the CBR might be tempted to make at least one growth-promoting rate cut before the end of the year, say most analysts.

FX effects have also been subduded. In the past the ruble’s value has been intimately linked to the ruble/dollar exchange rate, but since the state went back to using the so-called budget rule (that automatically siphons off excess petrodollar income to a sterilisation fund) the link between the ruble and the cost of oil has become loose.

Oil prices have surged recently on the back of various geopolitical problems in Iran, Venezuela and Libya, but the higher cost of oil has not made itself felt in the exchange rate.

“Despite the combination of two strong factors supporting the ruble – oil prices above $70/bbl and inflows to the FX market at a new high for the year – the ruble’s reaction was rather moderate: over the past two months, the Russian domestic currency appreciated by just Rb1.5/$ with oil prices rising by almost $10/bbl and more than $5bn in inflows from foreign investors,” says Tikhomirov.

“Our updated projections suggest Russia is past the inflation peak and that the annual growth rate will start declining from April,” said Isakov in a note released on April 23. “We revise our projected full 2019F inflation from +4.7% y/y to 4.3% y/y. We thus believe that the CBR will have space to cut the key rate twice this year: by 25bp as soon as June and another 25bp some time in 2H19 (with September being the most likely). The usual caveat is that our projections are based on a calm external backdrop and our current expectations regarding global food prices, which are prone to significant volatility.”

Still there are some other big unknowns ahead. The affect of the harvest always has a big impact on inflation and typically inflation falls to near zero in the summer as so many Russians make use of the good weather to stay for months at their dachas where they grow their own fruit and vegetables, driving down the cost of food – one of the biggest drivers of inflation. One of the reasons inflation has fallen to its post Soviet lows in recent years is the state has invested very heavily in agriculture to improve Russia’s food security, which in turn has held food costs down.

Another factor holding down inflation is the slower than expected growth in nominal and real wages. Real disposable income (the money left after paying for utilities and essentials) was down again 2.3% in the first quarter, as the Russian population goes into its sixth year of income stagnation, which in turn holds inflation back.

“From the monetary policy perspective, we see this creating the space for two key rate cuts this year,” says Isakov. “Essentially, we expect the CBR’s first cut to be delivered as evidence that the December hike has been sufficient in containing the risks of the second round effects of the VAT base rate increase. In our view, that was the key goal of the move back in December, and by June the low degree of this risk is likely to be apparent.”