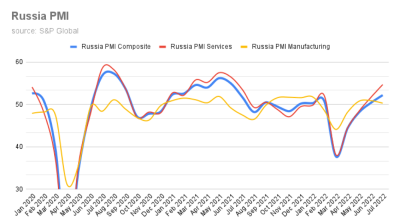 Russia's service PMI jumped to 54.7 in July, its fastest rate of expansion in a year, as orders and confidence increased. / bne IntelliNews
By bne IntelliNews August 3, 2022

The seasonally adjusted S&P Global Russia Services PMI Business Activity Index grew at its fastest pace in more than a year to post 54.7 in July, up from 51.7 in June.

The result “signalled the fastest rise in business activity since June 2021,” according to S&P. Any result above the 50 no-change benchmark is an expansion.

The strong services result follows on from a second month of more modest expansion in the manufacturing PMI index. The seasonally adjusted S&P Global Russia Manufacturing Purchasing Managers’ PMI Index was still in the black with 50.3 in July, but down slightly from 50.9 in June. (chart)

Combined, the good services result lifted the S&P Global Russia Composite PMI Output Index, which posted a respectable 52.2 in July, up from 50.4 in June.

“The latest index reading signalled a modest upturn in private sector business activity that was the steepest since June 2021. The expansion was led by the service sector, as manufacturers registered a stronger decline in production,” S&P said in a note on August 3.

The strong forward-looking PMI results bode well for the coming months and underpin a number of other positive results recently. The International Monetary Fund (IMF) recently improved its outlook for Russia in 2022, scaling back its estimate for this year’s contraction from -8% to -6%.

The Central Bank of Russia (CBR) has also revised down its estimate for this year’s contractions from -8% to -5% and economists polled in the regulator’s regular macroeconomic survey also forecast a milder -6% contraction. The CBR said this week that it expects the economy to contract by 7% in the third quarter, which will mark the nadir of the recession caused by the extreme sanctions imposed by the West after Russia’s invasion of Ukraine in February.

The performance of the service sector is particularly telling, as it is very dependent on the mood in the country. While the war has devastated Ukraine, for regular Russians life has more or less returned to normal, despite the disappearance of famous international brands.

“Russian service providers registered a stronger upturn in business activity during July, according to the latest PMI data,” S&P said. “The rate of output growth was the fastest for just over a year, with activity supported by a sharper upturn in new business. Greater client demand was domestically focused, however, as new export orders contracted markedly and at an increased pace. Pressure on capacity following increased new orders and input shortages was reflected in renewed upticks in employment and backlogs of work.”

Despite the enormous shock to the economy of the sanctions, the impact has yet to reach the street and unemployment is currently at an all-time low of 3.9%. (chart)

In line with greater new business, firms stepped up their hiring activity during July. Employment rose for the first time since November 2021 and at its sharpest pace for a year.

S&P panellists complained that inflation was high, but reported that rate of price rises was starting to slow. Inflation is soaring around the world as stagflation looms, but the CBR's fast action more than doubling interest rates to 20% on February 28 seems to have nipped inflationary pressures in the bud. Inflation peaked at 17.8% year on year in April, but since then has begun to fall and posted 15.9% in June. Russia is now the only country in Europe where inflation is falling. (chart)

At the same time, average cost burdens rose further during July. Where an increase in input prices was recorded, firms linked this to higher supplier and input costs, alongside hikes in wages. Some companies also stated that the impact of sanctions and unfavourable exchange rates had driven imported input costs up. Despite being sharper than the series long-run trend, the rate of inflation eased further from March's recent peak and was the slowest since February, S&P reported.

“The rate of cost inflation slowed for the fourth month running but remained historically elevated. Although the pace of increase in prices charged quickened, it was well below those seen earlier in the year,” S&P said.

Contributing to the growth in output across the Russian service sector was a second consecutive monthly increase in new orders at the start of the third quarter, S&P reports. “The rise in new business was sharp overall and the fastest since August 2020. The upturn also signalled a notable turnaround from the marked contractions seen earlier in the year,” S&P said. “That said, stronger customer demand was confined to the domestic market as new export orders fell substantially in July.”

Business is going so well that the service providers reported a rising backlog of work – the first in a year and a half. “Input shortages and a stronger upturn in new business led to the steepest rate of growth in unfinished business since November 2003,” according to S&P’s panellists.

A return towards business as usual has fuelled optimism in the services sector and firms reported their strongest degree of confidence in the outlook for output over the coming year for ten months. Companies attributed optimism to improvements in the health of the wider economy and further upticks in client demand.

Hungary’s GDP growth slows to 4.0% in Q3
9 hours ago
Poll shows only one in five Moldovans happy with their government
9 hours ago
Montenegro’s tourist arrivals almost double y/y in October
10 hours ago
LNG in Europe: ready or not?
10 hours ago
Russia’s GDP at 4.4% decline in October, construction and agro stick out
10 hours ago