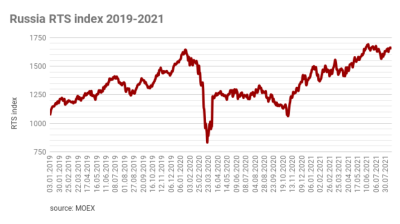 Russian stocks have been performing unusually well this year as geopolitical risks were partly quelled by the one-on-one summit between US president Joe Biden and Russian President Vladimir Putin in Geneva on June 16.

Both leaders made it clear they want to walk back tensions and form a new, if not “friendly” relation, then at least a less adversarial one. Biden has made it clear he want to clean the table of numerous outstanding geopolitical headaches and concentrate fully on dealing with the rise of China that is rapidly emerging as America’s main rival on the world stage.

But the rally is doubly surprising as the Russian market performance remains prone seasonal rallies in the spring and autumn; the market is usually dead during the long summer holidays in July and August. On top of the gains already made investors are anticipating more gains in the traditional “Santa Rally” that starts with the resumption of school on September 1 and can run through to Easter, typically returning at least another 20% of gains.

Also driving Russian stocks up is the combination of record corporate profits and the extremely generous dividends Russian companies pay – the highest in the world by a factor of two when compared to the MSCI EM benchmark. While the MSCI EM dividend yield average is on the order of 4% Russian companies pay a yield on the order of 7-8% and the state-owned blue chips have been ordered to pay out 50% of their profits as dividends and from this year all of them do.

Russian corporate profits extended their gains from the first two months of this year and made almost twice as much money in March as in any previous March since 2016, according to the latest Rosstat figures.

The enthusiasm for Russian corporate names is likely to continue into next year as those profits Russian companies are earning now will almost certainly be paid out to investors as generous dividends next summer, so analysts are expecting the rally to continue until at least Easter when the market traditionally sticks to the old saw: “sell in May and walk away.”

Corporates are doing well, but banking stocks are flying this year: the RTS is up almost a quarter, but banking stocks are up by almost 60% as of August 18. Financial stocks are leading the charge as the banks are making even more profits than corporate,  help by the fact they can retire more bad loans that is allowing them to  add provisioned capital to their bottom line, but also as investors use these shares as a proxy to play on the general economic recovery.

Russia's second-largest bank state-controlled VTB posted a record net profit of RUB85.5bn for 2Q21 under IFRS ($1.2bn, jumping from 2Q20 RUB0.8bn and flat quarter on quarter) with 17% return on equity. Likewise, Russia's largest bank state-controlled Sber (Sberbank) set a quarterly record, posting a RUB325bn ($4.4bn) profit in 2Q21 under IFRS, up by 7% quarter on quarter, jumping 95% year on year on a low 2020 base.  Total banking sector profits doubled in the first half of this year to RUB1.2 trillion – more than they earned in all of 2020.

But the real star of the banking sector is TCS Group the owner of Russia's only purely online bank that is as much an internet play as it is a banking stock, doubling its appeal. The bank’s stock has soared from around $20 two years ago – slightly above its IPO price of $17 in 2014 – to $99 as of the time of writing. The price of Global Depository Receipts (GDRs) of Russian banking TCS Group in London topped $100, pushing its capitalisation to over $20bn, RBC business portal wrote on August 17.

For most of the last six years following the imposition of Crimea sanctions, oil price shock and devaluation of 2014 the RTS has been range bound between 900 and 1,300. The index broke out above this range in the spring of 2020 only to be knocked back by another oil shock, devaluation and the start of the pandemic. However, since the pandemic began to recede after the new vaccines appear last autumn the market has started to recover.