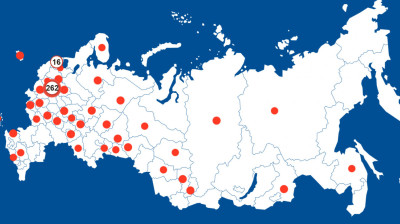 The Russian Direct Investment Fund (RDIF), Russia’s sovereign wealth fund, together with a Russian pharmaceutical group, is ready to start mass production of a drug used in China that was found to be effective in the treatment of COVID-19 patients
By bne IntelliNews May 14, 2020

The Russian Direct Investment Fund (RDIF), Russia’s sovereign wealth fund, is ready to start the mass production of a drug it claims is effective in the treatment of the coronavirus (COVID-19) together with Russian pharmaceutical company ChemRar Group, the fund said on May 13.

Together RDIF and ChemRar have developed a drug called Favipiravir that is based on a drug developed in Japan that was used against influenza, but was tested for use against COVID-19 and found effective.

ChemRar Group unites R&D service and investment companies in the field of innovative pharmaceuticals for the development and commercialisation of innovative medicines, diagnostics, preventive care and new treatments of life-threatening diseases in Russia and abroad.

Together RDIF and ChemRar  have been conducting clinical trials of a drug called Favipiravir which proved effective in treating coronavirus patients in China.

As bne IntelliNews reported the fund has already invested into, and is producing, a state-of-the-art briefcase-sized testing kit that can determine if a person is infected with the COVID-19 that was supposed to go into mass production in April. The kit was developed with the participation of Japanese scientists and Russia’s leading virology institute Vektor, based in Novosibirsk, tested and approved it.

Now the RDIF, together with ChemRar Group, has announced the positive first interim results of a “multi-centre randomised open comparative clinical trial” of the drug Favipiravir on patients hospitalised with COVID-19.

“According to the data received, 60% of the 40 patients who took Favipiravir have tested negative for coronavirus after five days of treatment, which is two times higher than in the standard therapy group. The data is consistent with the results of studies conducted in China, which also showed a reduction in the disease duration from 11 days to 4-5 days,” the RDIF said in a statement.

The drug is still undergoing extensive clinical trials, including at six leading Russian institutes in Moscow, Smolensk and Nizhny Novgorod. In total, 30 medical centres in eight Russian regions will conduct studies on 330 patients with confirmed coronavirus infection, the RDIF said.

The next step will be to get regulatory approval for use of the drug, which is expected to be completed by May, the RDIF said.

Elena Yakubova, CEO of ChemRar Pharma, said: “The Safety Council has held a meeting today as part of the clinical trial of Favipiravir. Independent experts discussed the effectiveness of the first five days of the therapy and confirmed the sufficient safety and tolerability of the drug, as well as recommending continued clinical trial. We are actively opening additional medical centres in Moscow and other Russian cities, but as part of the trial we can cover a limited number of patients. Given the urgent need to provide access to highly effective treatment for a greater number of patients with the coronavirus infection and supply the drug to medical facilities across Russia, we hope that the Ministry of Health will support the possibility of a temporary registration of Favipiravir under a fast-track mechanism in accordance with the Decree of the Government of the Russian Federation of April 3, 2020 No. 441”.

Once the trials are over and regulatory approval is granted then ChemRar Group alongside RDIF will be able to start commercial deliveries of the drug as soon as the end of May. The necessary reagents are available and production facilities are ready to start commercial production, according to the RDIF.

The advantages of Favipiravir include a significant reduction in the patient’s recovery time and their infectiousness, as well as the drug’s availability in tablets, which makes it easier to use.

Kirill Dmitriev, CEO of the Russian Direct Investment Fund, said: “The first positive results of the trial will facilitate an accelerated permission from the Ministry of Health of the Russian Federation to start using the drug, which will enable treatment of patients with Favipiravir across Russia's regions. The use of the drug will help reduce the length of stay in a hospital for patients infected with COVID-19 and the need for opening new hospitals. Two hundred and fifty treatment courses of the drug have already been produced, while another 1,500 courses are currently at the production stage. Production lines have been established in co-operation with the ChemRar Group for the production of up to 600,000 courses per year. Once the clinical trials and registration procedures for Favipiravir are completed, Russia will become one of the few countries in the world that independently manufacture a coronavirus drug and will be able to guarantee its reliable supply to medical institutions.”

Violent clashes with police at thousands-strong anti-lockdown protest in Belgrade
9 hours ago
Belarus presidential election to have no outside observers, opposition may united by a single candidate
17 hours ago
US intelligence memo admits there is “no evidence” of Russian payment of bounties to Afghans for killing US soldiers
22 hours ago
The bubonic plague has swapped its rats for marmots in Mongolia where two cases reported
1 day ago
Romania’s Blue Air goes from flying high to seeking debt restructuring
1 day ago