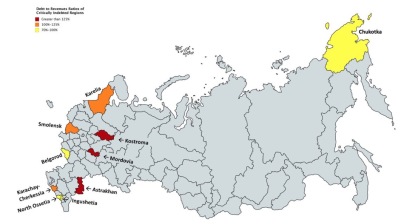 Only four regions are on the Ministry of Finance's "red" region list
By Ben Aris in Berlin April 16, 2019

With the Russian public finances in rude health the government is moving to take tighter control of regional debt, the build-up of which nearly caused a crisis only two years ago.

The State Duma Committee on Budget and Taxes is supporting a proposal by the Ministry of Finance to tighten control over expenditures and debts of the regions as part of an extensive overhaul of financial controls that has been put in place since the economic growth stalled in 2013.

The tax system has been overhauled and the tax service been given a new IT system that saw the tax take increase by 20% in 2018, despite the fact that the tax burden remained largely the same. Likewise, the powers of the Audit Chamber, now headed by former finance minister Alexey Kudrin, have been expanded and given powers to inspect regional finances. And the IT revolution is continuing as IBS, Russia’s leading software company, is putting regional treasury operations into the cloud and vastly improving their efficiency, as IBS CEO Svetlana Balanova told bne IntelliNews in an exclusive interview last year.

Regional debt ballooned during the “silent crisis” years to the point where some regions had debt servicing costs equal to their entire revenues. At the same time the cash strapped government slashed loans and disbursements to the regions.

The regional debt problem is not going to go away as the Ministry of Finance estimates that regional debt will grow 1.3-fold in the next three years from the current RUB2.2 trillion ($33.2bn) to RUB2.9 trillion, Interfax reported on February 18 with reference to a presentation by the Ministry of Finance prepared for the meeting of the State Duma Committee on Budget and Taxes.

In that presentation the ministry divided regions into three categories: low (green), medium (yellow) and high (red). In the green regions total debt should not exceed 50% of the value of total tax take and servicing costs should not be more than 5% of total spending. In the red regions the numbers are 85% and 8% respectively.

According to the Ministry of Finance, 38 regions are in the green zone, among them Moscow and the Moscow Region, St. Petersburg as well as the Leningrad Region, Sakhalin, Tyumen, Lipetsk, Bryansk, Voronezh and Kursk Regions. The yellow group includes 43 regions, among them the Krasnoyarsk Territory, and the Kaliningrad, Tver, Nizhny Novgorod, and Smolensk regions. The red group is thankfully small and contains the Jewish autonomous region, the Oryol region, the Pskov region, and the Republic of Mordovia.

On April 15 this system was formalised by a law and included changes that will reduce regions' cost of debt servicing by nixing some taxes.

Among the proposals is a reduction in the marginal costs for debt servicing from 15% to 10% of the total expenditures of the regions, that should not exceed 20% of the region’s revenues, taking into account subsidies.

Red regions will only be allowed to enter the domestic debt market to refinance existing debt but will not be allowed to take fresh debt.

Regions from the yellow group can raise fresh debt, but have to have their plans approved by the ministry. Green regions will be given a lot more freedom to manage their own debt and can raise fresh debt without restriction. Regions that qualify for moving up to the green group will only have their status changed after three years of meeting the qualifications.

The Duma is still discussing what will happen to the red regions which have breached the norms and whose debt is still growing. The ministry is putting together a package of loans and guarantees to help the wayward regions get their finances back in order. The ministry is also preparing to give these regions budget loans at preferential rates.

The situation in the regions is improving as the economy returns to growth, albeit lacklustre growth. Last year the income of regions grew and on aggregate they finished the year with a surplus of 0.5% GDP for the first time in 11 years. The federal government also put in a extremely strong 2.7% of GDP surplus for the whole year. However, despite the positive result total regional debt only fell by 4%, according to the Ministry of Finance.

On aggregate debt servicing costs are now only 1% of regional revenue, but the spread is wide and only about a dozen regions are net contributors to the budget.

To deal with the problem regions the ministry is in effect intending to take “manual control” of the finances of the most problematic, rather than just dish out grants to keep them afloat.

Although the authorities have already tightened financial control over the regions over the past two years, the problems of income inequality and the burden of expenses have not yet been resolved, analysts from the ratings agency S&P warned.

Analysts from Fitch ratings agency worry that the ministry’s hands on approach will increase the inequality between Russia’s regions as the ministry is focused on reducing risks that will limit a region’s ability to raise capital and invest. The upshot is the best regions will be able to pull further ahead and this will exacerbate the regional income inequality that exists between the top and bottom regions.