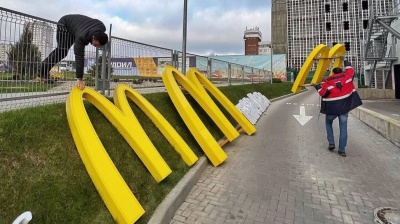 Mcdonald's signs being replaced in Belarus on Thursday. / Telegram/motolkohelp
By bne IntelliNews November 18, 2022

The Russian successor to McDonald's, “Vkusno i tochka”, will enter the Belarusian market. The company said on November 11 that it had signed a franchise agreement with the company KSB Victory Restaurants that manages 25 McDonald's restaurants in Belarus.

According to the statement, Vkusno i tochka was last week finishing the procedure of transfering the exclusive rights to KSB Victory Restaurants, and that “Until the transfer is completed, the chain will continue operations under the McDonald’s brand on the Belarusian market.”

The decision has seen high backlash from Belarusians on social media, with “McDonald’s Belarus” turning off its comments section on Instagram after receiving much critique. On Wednesday, November 15, independent Belarusian media reported that McDonald's restaurants in Belarus were already changing their signs. The lines were long at some of the restaurants both inside and in the driveways on Thursday, as many Belarusians wanted to get a taste of the McDonald's burgers before they’re replaced.

Therefore, the proposal by Russian Vkusno i tochka to take over the market likely came as a relief for McDonald’s, which probably wished to find a profitable way exit the market. Vkusno i tochka will be able to operate without the technical payment issues. However, judging by the reactions of Belarusians, they do not seem to have much faith in the new Russian fast food chain.