Russia’s manufacturing PMI back in the black, despite the war shocks 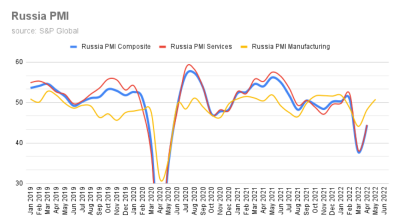 Russia's manufacturing is back in the black after crashing following the invasion of Ukraine and Russia's businessmen remain optimistic despite falling orders. / bne IntelliNews
By bne IntelliNews June 1, 2022

The S&P Russian manufacturing PMI was back in positive territory in May posting an expansion of 50.8, up from 48.2 in April as the chart shows. Any number above the no-change 50 indicates an expansion.

“Slower declines in output, new orders, employment and stocks of purchases all helped to boost the seasonally adjusted S&P Global Russia Manufacturing Purchasing Managers’ Index to 50.8 in May, up from 48.2 in April, to signal a renewed upturn in the performance of the Russian manufacturing sector,” S&P said in a note. “Longer lead times, ordinarily a sign of improving demand conditions but driven by sanctions and logistics delays here, also contributed positively to the latest index reading.”

Russia’s economy has been rocked by the extreme sanctions imposed by the West following the invasion of Ukraine at the end of February. However, thanks to the Central Bank of Russia (CBR) emergency measures that resulted in, among other things, the rapid recovery of the ruble exchange rate to the dollar, the economy has proved surprising resilient as confidence has rapidly returned. The shocks are not yet visible at street level, according to bne IntelliNews correspondents in Moscow.

Nevertheless, economists widely expect the economy to contract by between 8% and 15% this year due to the impact of sanctions, with some predicting a decline of as much as 30% if the energy sanctions threatened by the EU are put in place.

In the meantime, Russian business is trying to function as normal. Manufacturing output and new orders declined further in Russia during May as sanctions continued to dent client demand, albeit at a slower pace, reports S&P.

“New export orders continued to fall at a rate rarely exceeded in the survey’s history and supplier delivery times lengthened substantially as trade and logistics routes were reduced,” S&P added. “Despite a severe deterioration in vendor performance, input prices rose at the slowest pace since July 2020.”

Inflation spiked after the war started to over 20% but a concurrent emergency rate hike to 20% and strict capital controls imposed by the CBR headed off the worst of the inflationary pressure. The spike in the exchange rate, which briefly touched RUB133 to the dollar from around RUB70 before the war, was also extremely short-lived and so not inflationary. Since then the exchange rate has fallen back to around RUB60 to the dollar – stronger than before the war started. Since then, CBR Governor Elvia Nabiullina has cut rates to 11% as inflation pressures rapidly subsided.

“The rate of selling price inflation eased to only a marginal pace that was the softest for almost two years,” S&P’s panellists report.

But following the introduction of sanctions, input prices rose markedly, with firms continuing to record substantial increases in cost burdens in May.

“Currency fluctuations and sanctions reportedly pushed up imported input prices. That said, the rate of cost inflation softened to the slowest since July 2020 as some material prices fell,” S&P said. “Although output charges increased further, firms responded to softer upticks in cost burdens with only a marginal rise in selling prices. The pace of charge inflation was the slowest since June 2020.”

Nevertheless, a slow-moving shock continues to slowly depress business. Output levels remained in contraction during May, with the rate of decline solid overall but easing to its slowest since January.

“Driving the fall in production was another monthly decline in new orders midway through the second quarter. The fall in new orders reflected weak domestic and foreign client demand, as new export orders decreased at one of the fastest paces on record, due largely to the effect of sanctions. A number of firms stated that new export sales contracted as previously held agreements were brought to an end or scaled back,” S&P reports.

At the same time, input buying returned to growth for the first time since January. Material purchases were made in anticipation of greater future client demand. Nonetheless, both pre- and post-production inventories contracted further. Stocks of purchases fell at the joint-slowest pace since December 2020, however, as current holdings of inputs were utilised to supplement production

The full impact of the war and its long-term consequences is obviously not apparent to most businesspeople yet. Business confidence across the Russian manufacturing sector picked up in May after the economy stabilised. The degree of optimism was the strongest for three months amid hopes of greater client demand in the coming 12 months. The level of positive sentiment was below the series trend, however, said S&P.

Finally, Russian manufacturers depleted workforce numbers further in May. The fall in employment was solid overall as firms highlighted sufficient capacity to process incoming new work, but also a lack of skilled applicants to replace voluntary leavers. Backlogs of work declined only fractionally, however, amid some reports that material delivery delays held up the processing of incoming new orders.

Europe’s gas storage on track to meet 80% full by start of heating season
5 hours ago
Kosovo’s population dropped to 1.77mn in 2021 as emigration outweighed natural increase
16 hours ago
North Macedonia’s PPI jumps 21.7% y/y in May
21 hours ago
IMF says war in Ukraine, inflation and energy crisis pose challenges to Serbia’s economy
1 day ago
Poland’s unemployment rate falls to lowest point since 1990
2 days ago