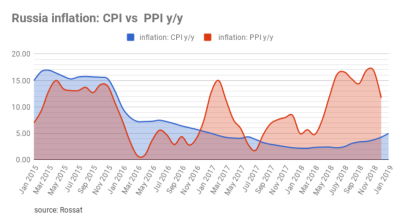 Russian inflation jumped to 5% in January from 4.3% in December on the back of VAT hike and rising food prices
By bne IntelliNews February 6, 2019

Russian inflation accelerated in January by 1% after an already higher than expected 0.8% in December to bring the annualised rate from 4.3% at the end of 2018 to over 5% for the first time in two years and well ahead of the Central Bank of Russia (CBR) 4% target rate, Rosstat reported on January 6.

Russia’s inflation rate is a key macroeconomic indicator for 2019. The CBR has been successful at containing the side affects from the silent crisis of 2014-2016 and the dramatic collapse of the ruble-dollar exchange rate. However, in the last quarter of 2018 inflation began rising again causing the CBR to prophylactically hike rates to 7.75% in December. The CBR has set its target inflation rate to 4% but is expecting inflation to rise to 6% this year before falling back to 4% in the next two years. The rate hikes that the CBR is forced to put through are killing off badly needed growth.

A new factor driving inflation this year is a hike to VAT from 18% to 20% that went into effect this January that is linked to an indexation of tariffs for housing and public utilities. However, economists surveyed by Interfax expected the VAT effect to be greater, to add 1.1% to a rise in prices in January.

The central bank and the Ministry of Economic Development declared in the second half of January that the increase in VAT had a restrained effect on the rise in prices.

The central bank expects inflation to increase in the first half of this year and reach a peak of 5.5-6% in March-April 2019. The Ministry of Economic Development predicted a lower 5% inflation in 2019.

Now analysts are watching the next CBR monetary policy meeting on February 8 and expecting the CBR to keep rates on hold, despite the increase in inflation.

A Bloomberg poll found that 18 out of 19 analysts expect the regulator to keep the rate at 7.75%.

Pandemic pushes public debt close to 80% of GDP in Albania and Montenegro
9 hours ago
Polish industrial production continues boom in December
17 hours ago
Slovenia’s economic sentiment indicator up 2.2 pp m/m in January
13 hours ago
National Bank of Ukraine retains a key policy rate at 6%, the outlook of the CPI deteriorates
2 days ago
Russia's National Welfare Fund accounts for almost 12% of GDP
3 days ago