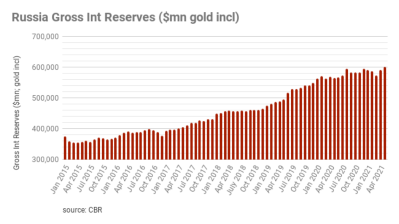 Russia's reserves have topped $600bn for the first time ever, slight more than the previous peak set in the boom year of 2008. / bne IntelliNews
By bne IntelliNews June 1, 2021

Russia’s gross international reserves (GIR) posted $600.9bn in May, its highest level ever, and $2bn more than the previous all time high set in August 2008, just before the global financial crisis hit.

Reserves fell to a post 2008 crisis low of $356bn in April 2015 as the government spent some $250bn to bail the economy out following the last oil price shock crisis in 2014 after OPEC collapsed the price of oil in an effort to destroy US shale production.

The CBR has been focused on rebuilding the reserves back to what CBR governor Elvira Nabiullina called her “comfort level” of $500bn,  a mark that was passed in June 2019.

Over the last two decades Russian President Vladimir Putin has been following a prudent policy to build up reserves as a buffer against the perennial crises. Former Finance Minister and Audit Chamber head Alexei Kudrin introduced the policy of creating reserves funds in the noughties and successfully ring fenced several hundred billions dollars from a profligate and corrupt government, by setting up a mechanism that automatically siphons off excess oil tax revenues to the fund when oil prices get above $42.

Reserves dropped to next to nothing in 1998 when Russia had to go cap in hand to the International Monetary Fund (IMF) to raise cash, but by 2000 the government had built up $160bn in reserves as the economy began a decade of strong growth.

The previous all-time high of $598.1bn was recorded in August 2008, before the global financial crisis. Reserves stayed at above the $500bn mark for the next five years until the 2014 crisis hit forcing the Kremlin to once again tap its rainy day funds to bail out economy.

Now that reserves are back well above the Kremlin’s comfort level the government plans to take some of the excess money and instead of siphoning it into the reserves funds it will invest it in the economy instead.